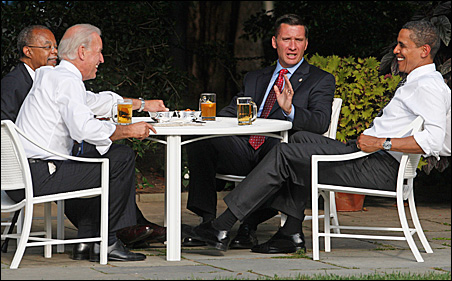 This contest had ended. See winner below.

The beer summit between Harvard professor Henry Louis Gates Jr. and his arresting officer, Sgt. Joseph Crowley, was held at the White House last Thursday. It inspired the Twitterati that a local summit could be convened, in part because a hometown beer, Summit, would be the appropriate sponsor.

This week’s MP140 question for MinnPost followers on Twitter is “Which two Minnesotans would you like to see sit down and hash out their differences over a beer?” Political rivals? Vikings quarterbacks?

Join Twitter, follow MinnPost, and tweet your answer, remembering to add #mp140 to your tweet. The Twitterer with the best answer will receive two tickets to the 2009 Renaissance Festival in Shakopee. Winner will be announced Wednesday morning.

burnunit I’d like a beer summit between the greatly aggrieved Strib commenters and nearly all the citizens of Minneapolis. #mp140

girlmeetsgeek #mp140 Don Shelby and Myself. We would have a petite chat about how he should deliver the news. Then we’d do beer bongs…in handstands. BFF

burnunit I’d like a beer summit between the greatly aggrieved Strib commenters and nearly all the citizens of Minneapolis. #mp140

MrMileAMinute #mp140: Ofcourse Franken & Coleman Al would be the comedian he is tipsey but obviously right for the job and Coleman brains logic

DonEffenberger MN Beer Summit: How about Wally the Beer Man and U of M Regents head? Maybe they could resolve Gophers stadium ‘Prohibition’ problem #mp140