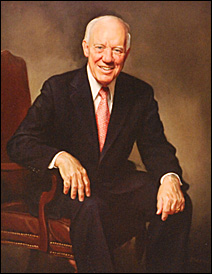 Two Chisholm guys are now looking across the Transportation and Infrastructure hearing room in the Rayburn House Office Building in Washington, D.C.

U.S. Rep. Jim Oberstar’s portrait was unveiled in the hearing room at a ceremony Wednesday evening. It’s an honor bestowed on all heads of the powerful  transportation committee.

As it happens, Oberstar’s portrait, which was painted by Minneapolis artist Leslie Bowman, hangs directly across the room from the portrait of the late John Blatnik, who was chairman of the committee for four years until his retirement in 1974. Blatnik, like Oberstar, was from Minnesota’s Iron Range. Blatnik served in Congress from 1947 to 1975, when he was succeeded by Oberstar, his longtime aide.

Oberstar became chairman of the committee when Democrats regained control of the House following the 2006 elections.