While the faltering economy has taken center stage in Campaign ’08, Iraq has fallen so far that the Republican hoping to succeed Congressman Jim Ramstad doesn’t even mention it on his campaign website.

A search for the word “Iraq” turned up zero hits on Third District GOP endorsee Erik Paulsen’s site. The omission is striking, since the DFL endorsee Ashwin Madia doesn’t shy away from referencing his Iraq War service as a Marine captain working on the country’s legal system, or offering his prescription to end the conflict. 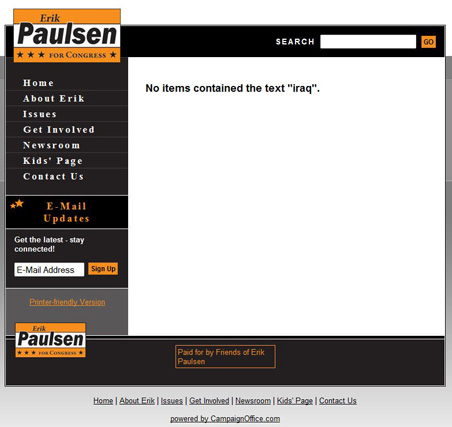 “It wasn’t a conscious decision to leave it out,” Paulsen political director Ann Mason says of Iraq. “We’re highlighting five or six issues, and as the campaign progresses, we’ll get more specific.”

With five months before Election Day, the candidate still has time to firm things up a bit.