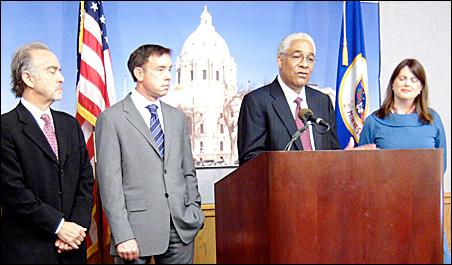 “If you take care of that middle class, that foundation of America, and everything builds off of that,” said Robert Pohlad, CEO of PepsiAmericas. He argued that programs and tax incentives that help lower- and middle-class Americans climb the economic ladder — even if creating them adds to his personal tax burden — are ultimately a good thing for his business.

In addition to tax distribution, the executives focused on health insurance. Ryan, who retired from Medtronic in 2005 after 12 years with the company, said today’s health-care system is “extremely cruel to families with no coverage or who are under-insured.” Obama’s health care proposal will help take care of more Americans who need coverage than McCain’s proposal will, he said.

Asked for comment on the business leaders’ announcement and about their views on the presidential candidates’ economic plans, the Minnesota Chamber of Commerce and Minnesota Business Partnership both said they focus on state policy and do not endorse national candidates. By publication time, the Midwest office of the U.S. Chamber of Commerce had not returned a phone call seeking comment.