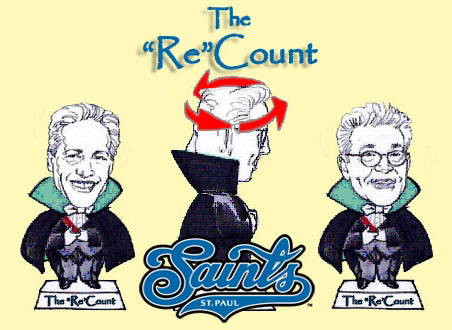 Courtesy of the St. Paul Saints

Kudos to the St. Paul Saints one more time.

Read what they’ve got in mind for next baseball season . . . those mischievous minds of the Midway.

With the heated election not quite over in Minnesota the St. Paul Saints have their response to the Norm Coleman/Al Franken race for U.S. Senate. You may know the Sesame Street’s Count Von Count, now the Saints are proud to introduce Count Von “Re”Count.

Saints fans will have the opportunity to decide for themselves with a doll that depicts the two men and commemorates this historic election. The figurine will consist of one head with Coleman’s face on one side and Franken’s on the other. The body of the doll features that of the famous Sesame Street Count (Count von Count) with a suit, bow tie and cape. The head will spin reminding fans of the dizzying experience that has been this state’s U.S. Senate race.

“The Saints have really outdone themselves with this one,” said Independent Senate candidate Dean Barkley. “I am glad, however, they decided not to make this a talking doll. Norm-Al will look great on someone’s shelf — silently.”

The first 2,500 fans that enter the gates on Saturday, May 23 are scheduled to receive a “Re”Count, but that number may change daily leading up to the event. For example, the Saints may only have 2,400 dolls to give away if an employee accidentally leaves a box of the dolls sitting in their vehicle overnight.

There will be a coloring competition where the winner will be the person who can correctly color inside of an oval shaped object. Following the third inning of their game against the Sioux Falls Canaries, no matter the score, the Saints will claim victory, “a victory for all Minnesotans.”

While fans choose whether to spin the doll to the side of Coleman or Franken, lawyers will be on hand to help determine their intent and challenges may be submitted to the Saints Fan Services Booth in written or oral form. All fans will participate in various counting exercises during the course of the game, including the popular exercise:

Coleman and Franken are currently deadlocked with 42% of the vote while Barkley finished with 15.2% after 2.9 million votes were cast.

Count Von Count could not be reached in his castle for comment nor could his most recent girlfriend, Countess von Backwards. It is not known if either cast a vote in the November 4 election. The Count is 1,832,652 years old.