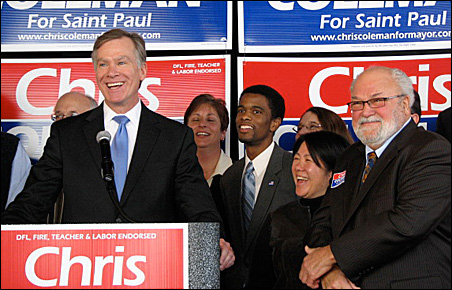 Chris Coleman made it official today: He is running for re-election in November, even if the economy stinks and the state’s likely to cut back its funding to cities.

And what a network of supporters he’s assembled. It’s almost like they copied a Facebook page of elected officials in St. Paul.

And looking very fine making an appearance on the stage with Coleman was former Mayor George Latimer.

Also showing up on the list of endorsers were 11 area unions.

But the police federation and firefighters union? Not on the list.

City Council President Kathy Lantry, who introduced the mayor at the announcement rally, noted that when the council and mayor agree on things — as they have, for the most part, during the three years of this Coleman’s era — “we are one united force.”

Even when they disagree, she said, “it’s done respectfully and knowing that there will be another day.”

Supporters were expecting maybe 50 people in the space atop the Crowne Plaza Hotel — the old Carousel restaurant in the days when the hotel was a Radisson. They got way more than 200, as backers put the word out via e-mail and networking sites.

In a long speech to the crowd, Coleman was careful to point out that it’s a tough time for elected leaders — saying that “governing in a democracy is never easy, but the immense challenges we face in 2009 present obstacles few of us have ever seen.” He wouldn’t want anyone to think it’s going to be easy.

Afterward, the mayor kind of tiptoed around questions about whether he’d commit to completing another four-year term, if re-elected. In other words: Is he planning to run for governor in 2010?

We’ll have to wait to see, but I detected a few not-particularly-subtle hints in the speech that he’s taking a good, hard look at that Summit Avenue mansion.

“Our work in St. Paul can be instructive to the governor as he and the Legislature struggle with the $5 billion problem the state faces. Look deep within our own structures to revamp how you do business. Ask tough questions. Don’t be afraid to talk to the men and women who do the work of our state and listen to their advice. Be honest with the residents of Minnesota. Don’t tell them we can cut our way to greatness or they can have something for nothing. Understand that our state has been at its greatest when we have invested in our children, our infrastructure and our quality of life.”

“In the next several months, decisions made a mile north of here will determine if St. Paul continues down the path to greatness.”