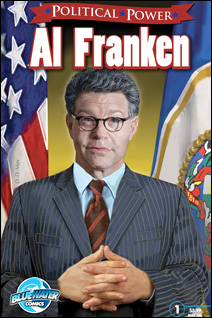 A new comic book will be released this spring about Al Franken, whose superpower may be that he’s a U.S. senator in a country that’s a superpower. He’s also got super comedy skills, or at least Lorne Michaels of “SNL” used to think so.

Says the company: “With stories that range from classic myths, science fiction and superheroes to Hollywood legends such as William Shatner, Roger Corman, Ray Harryhausen and Vincent Price, Bluewater is a fresh voice in comic publishing.”

And the company gives a brief promo of the comic book:

Writer Jerome Maida said that the comic may introduce readers to sides of Franken’s character that most did not know he possessed.

“Al Franken has this reputation —not completely unfounded, if you read the comic — as a metaphorical bomb-thrower, a guy who hates his enemies and has an in-your-face style,” Maida said. “While I did find some stuff that would support that perception, I also found out a lot more interesting stuff that makes him a real person, a character instead of a caricature.”

Coming to comic book stores everywhere in May.