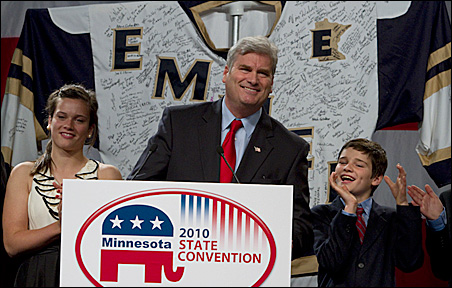 MinnPost photo by Terry Gydesen
After the first ballot, Emmer had 1,076 votes, to Seifert’s 865.

After the first ballot, it appears as if Tom Emmer is headed to endorsement.

There were rumblings that Marty Seifert, who had expected to be in a neck-and-neck race, would throw in the towel facing such a margin.

The roll call vote on the first ballot began at about 2:20, amid considerable anticipation in the convention hall. Despite requests from the podium that there be no cheers during the reporting of the votes, there were times the delegates couldn’t contain themselves.

But slowly, and unsteadily, the results of the first ballot were read aloud.