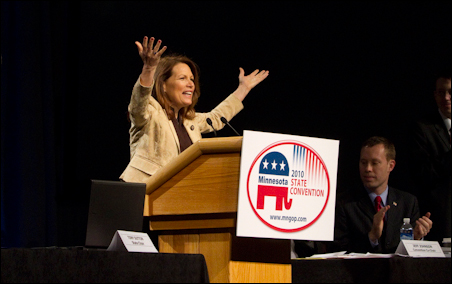 The label of the day appears to be “constitutional conservative.”

In addressing the Republican delegates this morning, both U.S. Rep. Michele Bachmann and Gov. Tim Pawlenty used the term in their efforts to unify a convention filled with a cross section of libertarians, Tea Party members, social conservatives, old-time Republicans, etc.

Pawlenty’s speech, by the way, surprised many, who expected the governor to be a little emotional in standing before a convention that endorsed him (in 13 ballots) eight years ago. But there was little emotion, as Pawlenty delivered one of his fairly standard stump speeches being used  on his national tour.

In the final moments of his speech, he did express his gratitude to the delegates and gave himelf a couple of pats on the back for “fundamentally changing Minnesota.” But, he warned the delegates, that political change “is not a sprint but a relay race.”

If the baton is not successfully passed to “a conservative,” all that the governor has accomplished “will be lost in six months,” he said.

Neither Pawlenty nor Bachmann endorsed a gubernatorial candidate.