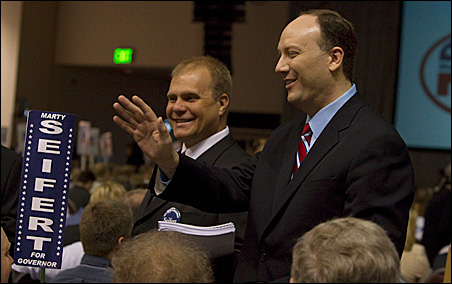 Let’s go into the weeds of campaign strategy for a moment.

There was an effort, probably by Tom Emmer’s campaign, Thursday night to erase a rule that calls for a roll call vote on endorsement balloting to at least slightly streamline the balloting process. The action was defeated, much to the delight of the Seifert people.

So at least for the first ballot this afternoon, the process will be very slow. There are 130 BPOUs (that’s Basic Political Organization Units), ranging in size from dozens of delegates to two or three. (BPOUs are the subdivisions of the county and Senate districts.)

The roll call means that every one of these 130 units will have representatives stand and announce the voting in their respective BPOU.

Why, oh why, does this matter to Seifert?

Because, he explained, much of Emmer’s strength comes from the large BPOUs in the metro.

That means, to Seifert’s thinking, that during roll call, there will be a relatively small number of Emmer supporters, representing large blocks of delegates, standing to voice their support for Emmer.

Meantime, there will be far more people from smaller BPOUs, standing to voice support for Seifert.

The delegate total may add up to be about the same, but Seifert believes the impression will be that Seifert has greater, certainly broader, support.

It also means that at least the first ballot process will be very slow.