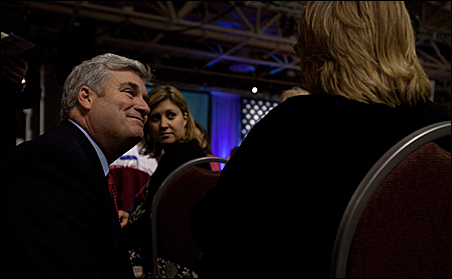 There was no question about the buzz of this convention when Tom Emmer was introduced. For the first time at this convention, the cheers were loud and loving and long.

Emmer’s entire program was accepted with delight by delegates. There was the standard introductory video, but in this case, it was designed to make Emmer, so often portrayed as the angry fighter, as the teddy-bear dad. In the video, he was goofing around with his kids and smooched by his wife.

The comparison between the warm applause for Seifert and the roars for Emmer was stunning.

“Leadership based on principles; we will change the culture of government.”

There was a shot at the media, always a popular thing to do at a Republican convention.

But the passion in his voice wowed the crowd.