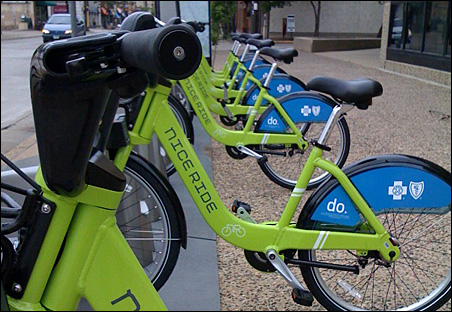 A new bike-sharing program kicks off today in Minneapolis, when Nice Ride begins offering greenish and blue bikes for short jaunts around the city.

Hundreds of the bikes are available at 60 kiosks around the downtown Minneapolis area through the nonprofit program. To ride you need a subscription, available online. The cost ranges from $5 for 24 hours to $60 a year. Then the first half hour of riding is always free; the next half hour costs $1.50, and the next half hour is $3. Riders use a credit card to pay at the kiosk pay station.

Bikes can be returned to any kiosk at the end of the ride, although if there are no empty slots you’ll be prompted to take it to another nearby kiosk with openings.

As part of the opening festivities, Talking Heads frontman David Byrne, an avid cyclist and the author of “Bicycle Diaries,” will join Mayor R.T. Rybak and others in a June 17 forum titled “Cities, Bicycles, and the Future of Getting Around.” The event, at 7 p.m at the Uptown Theater, will also feature writer Jay Walljasper and Steve Clark, manager of the Twin Cities’ Transit for Livable Communities Walking and Bicycling Program. Tickets art $10; for more information, go here.

MinnPost would like to hear from anyone who’s tried the system. How did it go? Are the kiosks located where you want to go? Are the bikes comfortable and easy to ride? How was the payment procedure? Was returning it easy? Let our readers know in the Comments section below. And if you have photos you’d like to share, send them to Corey Anderson at canderson[at]MinnPost[dot]com. Please include information about who shot the photo and who’s in it.