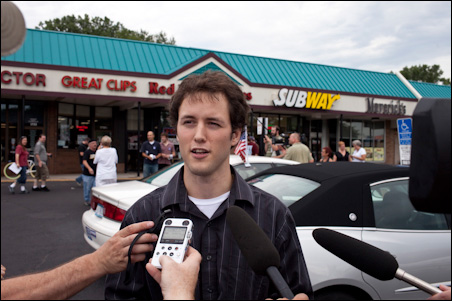 The man who dropped thousands of pennies on the table Wednesday during Tom Emmer’s Server Summit — and then gave an alias to reporters — says he wants to take the Republican-endorsed gubernatorial candidate up on his offer to talk.

But  Emmer’s campaign says they won’t reward such prankster activity with a meeting.

The penny-dropper was Nick Espinosa, who gave the name Robert Erickson when pulling his stunt. He says he was trying to draw attention to Emmer’s stance on immigration.

Emmer met Wednesday night with waiters and bartenders to discuss his comments about servers’ wages that caused a campaign flap that hasn’t died. During the already-contentious meeting, Erickson/Espinosa dumped a bag with 2,000 pennies on Emmer’s table, startling the candidate.

Erickson/Espinosa says he was rushed out of the room by Emmer supporters before he could say more. The meeting broke up a little later.

In an interview afterwards, Emmer urged the young protester to stick around and discuss the issues.

“Have a little courage, man. Come on back, come up and shake my hand,” Emmer said.

So Erickson/Espinosa responded that he wants to do just that, and issued an invitation on his website.

“I invite you to join that debate with me and others at Mercado Central in South Minneapolis. You told the media that you’d welcome an exchange. I’d like to talk to you, and so would many members of the Latino community. Let’s set a date in August.”

Emmer Communications Director Bill Walsh said today that they will not reward Erickson/Espinosa’s antics by meeting with him.

“We can’t wait to discuss immigration issues with the endorsed Democratic candidate after the Aug. 10 primary, and whoever that is will probably have similar viewpoints as this person,” Walsh said. “But you don’t pull a stunt like that and expect us to provide a public forum.”

Walsh joked that the next step would be to send College Republicans to DFL events and pull similar stunts, and then demand press attention afterward in the parking lot to talk about tax cuts. He emphasized: “That’s a joke.”

On the website invitation, Erickson/Espinosa explains why he cares about immigration policy: “My father came here from Ecuador as a student when he was 18. When I was fifteen, agents came to our home while we were working in the yard, arrested him, and deported him.”

Our community would like to talk with you about the root causes of immigration, especially trade policies like NAFTA which make it impossible for farmers in Mexico to sustain their families and forces them to leave their communities to come north.

Our community would like to talk to you about your past legislative proposals directed toward Minnesota’s immigrants. You proposed taking prenatal care away from immigrant women. You co-sponsored an English only bill. You opposed the DREAM Act and favored 287g programs. Most recently, you called SB1070 a “wonderful first step” and your closest allies introduced a copycat bill in the Minnesota legislature.

We would like to talk to you about fixing a broken system, about ending fear in our communities, about ways that we might work together to create a pathway to citizenship.

You say you won’t run from a chance for a good discussion about controversial issues; we won’t either.