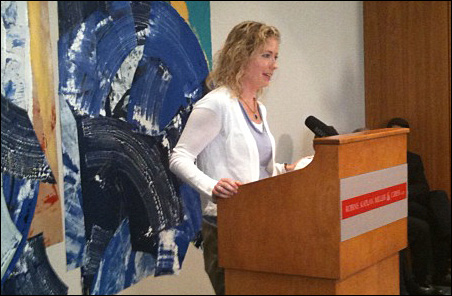 MinnPost photo by Beth Hawkins
Survivor Erica Gwillim: “Justice would have been for this never to have happened.”

A San Francisco-based engineering firm has agreed to pay $52.4 million to settle lawsuits brought by survivors of the 2007 Interstate 35W bridge collapse and the families of the 13 people who died.

The suit accused the firm, which was under contract with the state of Minnesota, of failing to properly evaluate the bridge’s structural integrity.

“I’m very happy that this lawsuit has reached its conclusion,” survivor Garrett Ebling said at a press conference today. “There’s no doubt in my mind any of us would trade this settlement for a bridge that was structurally sound in the first place.”

The suits, most of which were filed by Robins, Kaplan, Miller & Ciresi last year, alleged that URS Corp. failed to note that the “massive roller bearings” that were supposed to allow the bridge to expand and contract during extreme temperatures were stuck.

“The bridge fell on the hottest day of the year,” said Chris Messerly, a partner at the firm. “It desperately wanted to expand.”

The law firm’s investigation went much further than the one conducted by the National Transportation Safety Board, which blamed the inadequate design of the bridge’s gusset plates for the bridge’s collapse, he added.

As a part of the litigation, the law firm spent $2 million on outside experts and reviewed “millions upon millions of documents,” he said. Two documents, he said, alluded to the faulty bearings.

URS had argued that it was unaware of the gusset plate design flaw the NTSB concluded caused the bridge’s collapse.

The engineering firm said the settlement did not mean it was admitting any liability. “URS believes it is in the best interest of the company and its shareholders to resolve this matter and avoid the cost and distraction of protracted litigation,” officials said in a press release.

Had the case gone to trial next April as scheduled, Messerly said he was confident he could have proven that the gusset plates were only one of the causes of the collapse. He said he had laid out his case in a request to Hennepin County District Court Judge Deborah Hedlund seeking punitive damages.

“Whether it [URS’ willingness to settle] had anything to do with the pending motion for punitive damages, I don’t know,” Messerly said.

Hammered out during a 13-hour marathon session on Aug. 14, the settlement marks the end of the last of the legal proceedings involving victims.

In 2008, Minnesota established a $37 million fund to compensate victims and the state Supreme Court appointed three special masters to oversee its distribution. The masters calculated each victim’s losses, but the Legislature was unable to appropriate enough money to compensate the families of the 13 people who died and the 150 injured survivors.

The settlement with URS will mean every victim who filed a claim is fully compensated, Messerly said. In addition, a number of insurance companies that paid hospital and workers’ compensation claims will be reimbursed.

Robins, Kaplan, Miller & Ciresi pursued 103 of the cases on a pro bono basis; another 30 were handled by Schwebel, Goetz and Sieben. Instead of attorneys’ fees, Robins’ portion of the settlement includes $1.5 million to be donated to create a memorial to be located somewhere near the bridge.

Survivor Erica Gwillim said she hoped the litigation would send a message about accountability. “Justice would have been for this never to have happened,” she said. “For our bodies to be whole and our relationships intact.”