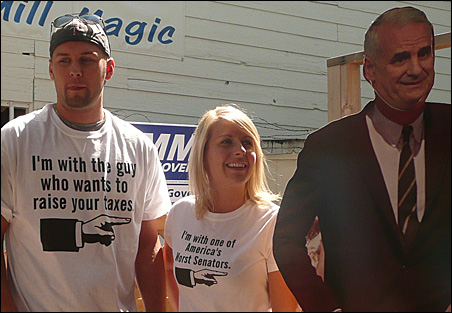 File this under: “Be careful what you wish for.”

Ten days ago, angered by what he saw as disruptive behavior by Republican Party trackers, DFL gubernatorial candidate Mark Dayton called on the GOP to rein in the folks who follow him with mini-cams.

Among other things, Dayton’s campaign manager Dana Anderson wrote to Republican candidate Tom Emmer’s campaign manager Cullen Sheehan and GOP chairman Tony Sutton to have “your trackers wear a t-shirt, a hat, a button, or something that clearly identifies them as staff of the Republican Party or the Emmer Campaign to voters when they are intentionally causing these disruptions.”

In response to Dayton’s request, the GOP unveiled tracker T-shirts today at its State Fair booth during what Sutton called a “Republican fashion show,” complete with a life-size cutout of Dayton as a prop.

The fronts of the shirts, with a pointing finger are — er, ah — self-explanatory, as you’ll see in the photo here. The backs identify the trackers by using the GOP’s web address to drive viewers to its site. By the way, as you might suspect, the fingers point to the left, as anyone affiliated with Emmer will always be to Dayton’s right.

According to GOP spokesman Mark Drake, trackers Abby Michaud and Jordan Hanson will wear the shirts while they track Dayton on the State Fair grounds over the next 10 days. Then, the shirts will be placed in the GOP’s archive of fun tricks.

Dayton’s campaign declined comment, but the Minnesota DFL came out swinging. DFL spokesman Donald McFarland said: “This is a campaign about the future of Minnesota, not about political stunts. Tom Emmer says he wants to be governor of Minnesota. Are we just going to have four years of political stunts? Minnesota deserves better.”

But there’s a chance the GOP will keep listening closely to Sen. Dayton for guidance. Said GOP Deputy Chairman Michael Brodkorb of Dayton: “If he has any future requests, we are all ears.”