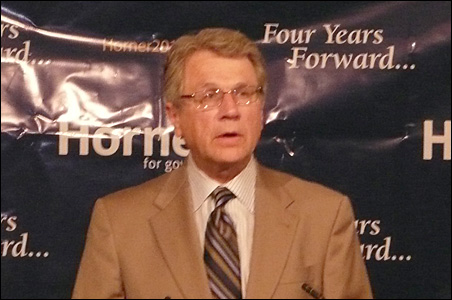 MinnPost photo by Jay Weiner
Tom Horner: “If this is an election that is decided by the 25 percent of the electorate that are small ‘i’ independent, I think I win.”

The day after the night before began smack dab in the middle — or that was where Tom Horner’s message was, and surely will be for the next three months.

“This cannot be a debate over the status quo,” Horner said at an early morning news conference. “For a lot of Minnesotans the status quo isn’t working.”

He said he believes he can engage the “60 to 70 percent of Minnesotans who have been pushed to the sidelines,” the undecideds.

But Horner could only muster 11,300 votes, compared with more than 400,000 for the three DFLers. He said he sees a path from five figures to six — in a general election the winner of this gubernatorial race will probably need to be in the 800,000- to 1 million-vote range.

How will he get from 11,300 to the corner office in the Capitol?

“If this is an election that is decided by the 25 percent of the electorate that are small ‘i’ independent, I think I win,” he said.

Horner’s public day began before his opponents’ with a certain energy, and that was Horner’s demeanor, as he pinballed from the Brooklyn Park Rotary Club to the State Capitol campus for the news conference to Mankato and then back to the Twin Cities for a fundraiser tonight.

While the DFL sorted out its winner and its “unity,” while Republican Tom Emmer prepared to launch his first post-primary campaign ad later in the day, Horner, the winner of the Independence Party primary election, told reporters in the State Office Building that he was the candidate for voters in search of “common sense.” And, he said, he would begin running statewide TV commercials soon, produced by Parachute Design, at a cost of a number of hundreds of thousands of dollars.

He said by the end of August he hopes to have raised about one-third of his stated goal of $2.5 million for his campaign.

But Horner, a longtime Twin Cities public affairs consultant with Republican ties, knows he’s not a celebrity like the most successful Independence Party candidate of all-time, Jesse Ventura.

“I don’t think 2010 is a year in which Minnesotans will elect a celebrity,” Horner said. “I think I’m gonna win because there are Minnesotans who are saying, ‘This is the year we are going to decide the future of Minnesota. Who’s offering a vision?’ ”

With that, he was off to Mankato, in pursuit of hundreds of thousands of votes out there in the great middle.

Man in the middle: Tom Horner says if independents rule, he wins