IMPACT Minnesota, a new independent-expenditure political action committee, has formed to focus on getting out the vote in the African-American community and in letting candidates know the impact black voters can have on the outcome of elections.

It will also be there to help DFL gubernatorial candidate Mark Dayton.

IMPACT Minnesota’s executive director is Corey Day, who is also a partner in the St. Paul-based political and social media consulting firm Strategic Field Concepts. Day has hired a handful of staffers from the campaign of Matt Entenza.

Entenza ran and lost in the DFL primary last month, but he made his mark by reaching out to young voters and the Twin Cities’ minorities communities.

Among the first hires by IMPACT Minnesota is its field director, Nick Muhammad, a hip-hop MC and organizer, credited with aiding Entenza’s campaign in those two target groups.

IMPACT Minnesota is being funded, in part, by Win Minnesota, another independent-expenditure fund. Win Minnesota has helped to fund the Alliance for a Better Minnesota, which, among other things, has been backing TV commercials defining and criticizing Republican gubernatorial candidate Tom Emmer.

Day wouldn’t disclose how much money IMPACT Minnesota has received, but an office has been opened in North Minneapolis and staff hired. “We’re going to have a pretty comprehensive campaign,” with targeted radio and other “speciality media,” Day said.

IMPACT will be targeting voters in key geographic areas — such as Minneapolis, St. Paul, Brooklyn Center and Bloomington — and among younger voters. Organizers will be going door to door and storefront to storefront and greeting citizens with street teams at busy corners seeking pledges that people will vote. 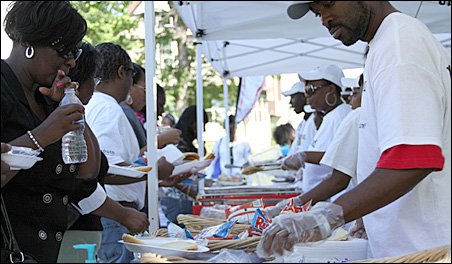 Courtesy of Impact Minnesota
IMPACT Minnesota has been busy this summer interacting at community events.

But Day acknowledged, “At the end of the day, our focus will be getting folks out for Mark Dayton.” Dayton’s former wife, Alida Rockefeller Messinger, is a substantial backer of Win Minnesota.

“The African-American community needs to know which candidates support their issues, because their vote alone can make the difference,” Day said.

But why now for an organization like IMPACT Minnesota?

Recently, Day said he and others haven’t seen the “buzz and excitement” in the African-American community about the upcoming gubernatorial election. “We want to make sure we create that buzz and excitement,” he said.

Day, 34, moved to Minnesota in 2000 to work on the U.S. Senate campaign of DFLer David Lillehaug, the former U.S. attorney. Day was a get-out-the-vote deputy director for the 2008 Obama campaign in Florida. He also worked in the re-election campaign of Los Angeles Mayor Antonio Villaraigosa.

Still, Day said that IMPACT Minnesota will have a life beyond this 2010 political campaign. “We are not the kind of organization that packs up the day after an election,” he said.