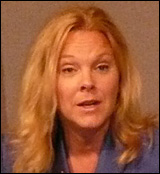 Citing Otto statements at debates, in media reports and on her campaign website, Anderson said that the DFLer is wrong in claiming that Anderson performed only 10 major investigations or letters of review during her years in the auditor’s role, from 2003 to 2007.

That, Otto said in an interview today, is exactly what Anderson posted on the official state auditor’s website when she was in office.

But Anderson said at a news conference this morning that she initiated “at least 29 investigations/letters of review” during her time as auditor. She charged that Otto has scrubbed the auditor’s site of some of her work.

Here’s Anderson’s complaint (PDF). And here’s the link to her statement today and all of her documentation.

Otto said the auditor’s website was redesigned when she took office in 2007 because it was difficult to find information on the site administered by Anderson. Information was reorganized, not deleted, she said. Said Otto: “If there’s something missing, she should certainly let us know.”

Anderson charged Otto is “manipulating public data” to her advantage.

Last year, Otto won the National State Auditors Association Excellence in Accountability Award. If she is re-elected, Otto is on track to become the president of the nonpartisan national auditors group, selected by her peers.

Anderson expects an expedited review by the Office of Administrative Hearings.