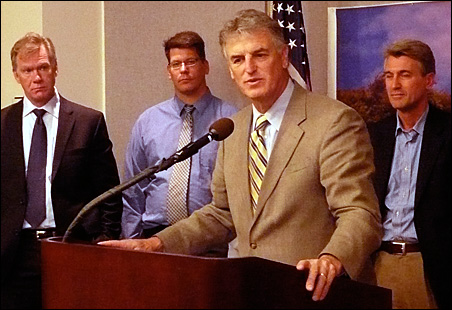 A dozen current and former city and county officials from across the state — all but one of them DFLers — attended a Capitol news conference this morning endorsing DFL gubernatorial candidate Mark Dayton.

When a reporter asked the assembled group if anyone considered him or herself a Republican, no one raised a hand. Afterward, Oak Park Heights Mayor David Beaudet told a reporter he is “a Rockefeller Republican.”

The group, part of a longer list of 46 local government officials calling themselves “Community Leaders for Dayton” bemoaned the cuts in local and county government aids during the Pawlenty administration and predicted a similar experience under GOP candidate Tom Emmer and Independence Party candidate Tom Horner, should they be elected.