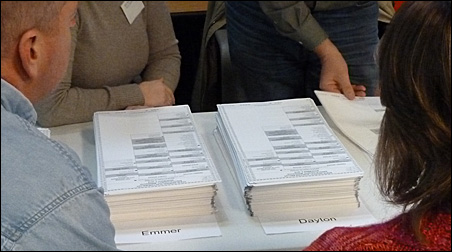 MinnPost photo by Jay Weiner
Emmer and Dayton ballots prepared for recount in the basement of the Dakota County Administration Center in Hastings.

With the dust settled on Day One of the recount, numbers abound.

The Secretary of State site data goes through 8 p.m. Monday night. It doesn’t include the so-called “call at the table.” That is, when a vote is challenged — mostly by Rep. Tom Emmer’s reps — that challenge is taken out of the count for Dayton.

According to the official secretary of state’s site, Emmer’s recount staffers validly challenged 281 votes Monday. Based on what we learned in 2008, most challenges won’t be upheld at the State Canvassing Board. Thus, Dayton can expect to hold on to almost all of those 281 challenges.

If you want to see the number of challenges and where the recount stands by county, go here and click the dropdown box for “Select a County.”

As with Al Franken’s team in 2008, the Dayton recount squad had its 1,900-plus volunteers in the field Monday diligently keep track of every “call at the table,” and the final counts.

While Dayton’s numbers are unofficial, history shows that the same crew involved here — most of the legal team, plus data guru Andy Bechhoefer — were spot on when it came to nailing down the recount results in the Franken-Norm Coleman recount.

In any event, the Dayton side said this morning that their candidate picked up 177 votes during the recount Monday as 66 of 87 counties completed their work. More than 48 percent of the state’s votes have been recounted, according to the Dayton report, a bit more than the official mark of 44.65 by Secretary of State Mark Ritchie’s office; that’s because the SOS office had an 8 p.m. cutoff for reporting.

That explains why, according to the official SOS site, that Emmer is “leading” by 50,000 votes. That is, he has that margin among votes recounted so far.

As for challenges, as might be expected the Emmer campaign is leading big-time, having made 92 percent of all the votes challenged. But, all in all, the challenging of ballots is down from 2008 when, according to Dayton recount manager Ken Martin, there was “hand-to-hand combat” on every ballot.