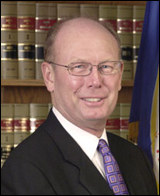 For the first time in 15 years, there will be a new commissioner of agriculture in Minnesota.

Gov.-elect Mark Dayton announced this morning that he is appointing former DFL legislator Dave Frederickson to the post held by Gene Hugoson, who has been commissioner since 1995.

Hugoson’s long tenure bordered on unique in government. He first was appointed by Arne Carlson and then stayed on to serve under Govs. Jesse Ventura and Tim Pawlenty.

For the last two years, the 66-year-old Frederickson has served as director of agricultural outreach for U.S. Sen. Amy Klobuchar.

Frederickson becomes Dayton’s second commissioner appointment. Previously, he had appointed Tom Sorel to stay on as commissioner of the Department of Transportation.