Individual charitable giving in Minnesota dropped 7.7 percent in 2008, mirroring the economic downturn, but foundation and corporate giving grew slightly that year, according to a new report released today by the Minnesota Council on Foundations.

Foundation and corporate grantmaking for that time increased 3.6 percent.

The report, “Giving in Minnesota, 2010 Edition,’’ reflects donations in 2008, the most recent giving data available from IRS tax returns, according to the foundation. 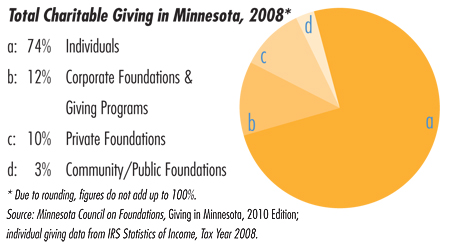 “The decrease in overall charitable giving in Minnesota reverses a long-term trend of slight increases or at least flat giving from year to year,’’ said Bill King, MCF president. “But we knew the drop was inevitable, given the steep recession and slow economic recovery.’’

Together, giving by individuals, foundations and corporate giving programs equaled $5.4 billion for 2008, a drop of 5 percent from 2007.

Individual donations totaling just over $4 billion in Minnesota made up 74 percent of all charitable donations in 2008, whereas foundation and corporate grantmaking figuring at $1.4 billion comprised the remainder.