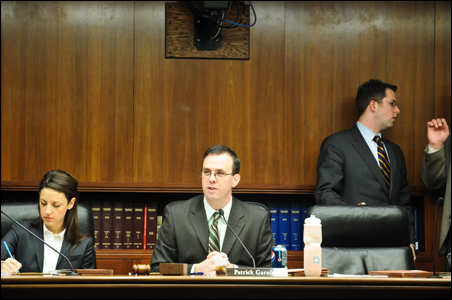 Education Minnesota, the state’s largest teachers union, made its session priorities clear today, but it’s very unclear how much common ground it will find with the new Republican legislative majority’s priorities and approach.

But some methods the union outlined contradict the GOP ideology and legislation already in motion, or they appeal to competing bills. Other issues lawmakers have raised are already bubbling up.

“I’m very confident that Gov. Dayton and the Legislature will reach an agreement on education reform this year, said Rep. Pat Garofalo, House Education Finance Committee chairman. “I am unsure of what role the teachers union will play in it.”

Education Minnesota has 66 active lobbyists registered with the Minnesota Campaign Finance and Public Disclosure Board. Between January and June 2010, it spent a cumulative $558,000 on lobbying expenses and advertising that it reported to the board.

Tackling the state’s achievement gap is the weightiest issue on the union’s agenda this session, and Dooher was confident it could be bridged.

“It is within our grasp to close the achievement gap in Minnesota,” he said.

The proposal urges the Department of Education to identify the state’s 32 lowest-achieving schools, reduce class sizes and concentrate resources there. In the future, the union said students should have access to all-day kindergarten programs and there should be a statewide assessment of early childhood education services.

Although the union’s proposal targets a handful of the state’s roughly 2,000 schools, the question of how to fund such future services — like all-day kindergarten — still looms. Garofalo said he’s waiting till the state’s February economic forecast before predicting if there are any additional resources for K-12 education.

But a $6.2 billion deficit over the next two years, projected structural shortfalls over future bienniums and an education system that eats up roughly 40 percent of the state budget make it difficult to dream about seeing any more money.

So far, alternative licensure, which makes it easier for college graduates to start teaching, has been the most widely discussed reform this session. At least two bills currently exist in the House — with varying degrees of stringency — that address the need for more educators versed in certain subjects.

Last year, Education Minnesota managed to tank the entire omnibus K-12 education policy bill over language allowing alternative licensure in a way that Dooher said would “weaken the standards for becoming a teacher.”

The legislation, sponsored by Rep. Carlos Mariani, DFL-St. Paul, focused on increasing diversity in the classroom and plugging teacher shortages. He modeled it after the Teach for America program.

“Increasing diversity is always going to be great,” Dooher said. “But is that the answer? No.”

Both Garafolo’s language and union priorities include requiring a teacher to pass skills tests and complete 200 hours of training, but Education Minnesota went further by supporting a move that would involve teacher supervision for the first 90 days of class.

“We would love to sit down with Rep. Garofalo and work on a responsible way to get people into the classroom and make sure that they can demonstrate that they know how to teach,” Dooher said.

Adding to the debate, Erickson sponsored a bill that would repeal the state deadline school districts and bargaining units face in settling contracts. If she manages to repeal the current law, unions will lose leverage over districts that faced state aid penalties if they didn’t reach a deal.

Erickson acknowledged the move would anger Education Minnesota, but she said it’s important to find a balance so that districts aren’t penalized.

Despite the philosophical disagreements, the union managed to make an ally in Mariani over statewide teacher evaluation. The issue also was discussed in the Education Reform Committee last week.