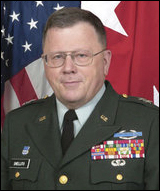 Major Gen. Larry Shellito, who retired last fall as head of the Minnesota National Guard, will return to state action as the new commissioner of the Veterans Affairs department.

Gov. Mark Dayton announced the appointment this morning, calling Shellito “a strong and dynamic leader who is respected for his dedication to our nation’s service men and women.”

U.S. Rep. Tim Walz, the highest-ranking enlisted soldier ever to serve in Congress, said he was “thrilled” with Shellito’s appointment:

“He is a strong leader, a good listener, always focused on the mission at hand, an excellent manager and a visionary thinker. His foresight had the Minnesota National Guard prepared years in advance for their combat missions, guaranteeing the highest level of performance from our brave troops… I know as General Shellito transitions into this new role, he will bring the same dedication and work ethic he has in the past and will put veterans and their families first. I look forward to working with him to ensure that all the men and women who have risked life and limb in service of our country have the care they have earned.”

When he prepared to leave the Guard after seven years at the helm, Shellito was praised by soldiers and politicians. Sen. Amy Klobuchar said: “General Shellito, already a decorated veteran of the Vietnam War, will now once again transition from warrior to veteran, from general to grandfather, from commander to father.”

But the 65-year-old soldier answered the new call to head the state agency that oversees state veterans benefits and veterans homes.

“While a US Senator and a Member of the Senate Armed Services Committee, I worked closely with General Shellito on many projects, including my picnics for the families of Minnesota National Guard Members heroically serving in Iraq and Afghanistan and obtaining the first Congressional funding for the Guard’s pioneering ‘Beyond the Yellow Ribbon’ program.”

Shellito said in a statement:

He enlisted in the Army in 1968, spending time in Vietnam. He joined the Minnesota Army National Guard in 1973. He’s been awarded the Distinguished Service Medal, Legion of Merit, and the Bronze Star.

Gen. Larry Shellito back in action as Dayton’s head of Veteran Affairs