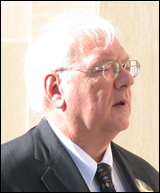 Paul Ridgeway, who became well-known for planning big events around town and around the country, has filed for bankruptcy, two years after he admitted that he had big financial troubles.

He also directed Pope John Paul II’s trip to Denver. A company website — Ridgeway International — doesn’t appear to have been updated since 2008.

A 2009 Star Tribune story outlined a few of his financial difficulties:

At the time, Ridgeway told the paper everyone would be paid, eventually:

“This is a very painful time,” the normally upbeat and effervescent Ridgeway said in an interview … “This has never happened before. All of our vendors will be paid.”

But Ridgeway wouldn’t comment for the Strib’s story Sunday on the bankruptcy. He’s been working as a part-time executive assistant for Ramsey County, earning $39.42 an hour, according to the bankruptcy filing.

He plans to liquidate personal and business assets estimated at $1 million to settle creditor claims of $4.6 million, according to the Dec. 30 filing in U.S. Bankruptcy Court in Minneapolis, the story said.

Others among the dozens of creditors are: Marilyn Carlson Nelson, the former CEO of Carlson Cos. who is owed $300,000, and restaurant developer Steve Schussler, who is owed $50,000. He also owes about $80,000 in past-due income taxes to the IRS, Minnesota and other states, along with several hundred thousand dollars in past-due wages to employees, including about $180,000 to two adult children who worked for his companies.

I ran into Ridgeway several times last fall at campaign events for Matt Bostrom, who was elected Ramsey County sheriff. Ridgeway said he was volunteering as director of operations for the campaign.

He had plenty of good things to say about Bostrom, comparing him to Hubert H. Humphrey, but little to say about his financial shape. This is months before the bankruptcy filing.

“I’m coming out of challenges. I lost a fortune and I’m not out of it, yet. It’s going to take a take a few years to pay everyone back,” he said.

“It’s like when you fall out of a boat in the middle of a lake — you’ve got to get back to the boat or swim like mad.”