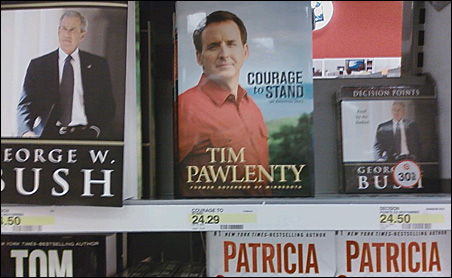 MinnPost photo by Joe Kimball
“Courage to Stand” is on the shelf next to former President Bush’s memoir at the West St. Paul Target store.

Tim Pawlenty’s new book, “Courage to Stand,” is scheduled to go on sale Tuesday, but there it was yesterday in the books section at the Target in West St. Paul, a full week ahead of schedule.

The result: some confusion and some consternation.

Target’s display is a no-no, says publisher Tyndale Press, which lists the release date as Jan. 11.

Mavis Sanders, the publisher’s corporate publicist in Illinois, said that’s a strict street release date, and the book isn’t supposed to show up on store shelves until then. (She also said Alex Conant, communications director for Pawlenty’s Freedom First PAC, is handling most of the public relations efforts for the book.)

Sanders said sometimes store employees put copies on the shelf early by mistake, but she plans to tell the sales department about the early sales violation at Target.

Bookstores and retailers often get shipments of books in advance so they can be available for a big unveiling on the release date, but they agree not to sell early. Some bookstore owners say they’ve been told by publishers that if they violate the release date, they won’t get any more books shipped in advance.

A big retailer like Target jumping the gun really ticks off independent book stores, such as Lake Country Books in White Bear Lake.

“I’ve had people in here already asking for ‘Courage to Stand,’ but I had to tell them it hasn’t been released yet. Now they’ll just go to Target and never come back here,” said Susie Fruncillo, co-owner of Lake Country.

“Here we follow the rules, but they go ahead and get the sales,” said Frincillo, who earlier this morning had tried to get copies of the Pawenty book from Partners Books in Michigan but was told it wasn’t available yet.

And the Baker & Taylor national book wholesaler website said “Courage to Stand” is not yet published, she said.

There did seem to be some confusion on the actual release date; some booksellers found 1/8/11 as a release date. They wondered if Tyndale, a relatively small publisher best known for religious titles, might not have a firm policy on release dates.

But spokesperson Sanders said they definitely do, and it’s Jan. 11 and not to be violated.

Online databases show Ingram, the biggest national book wholesaler, already has 2,900 copies of “Courage to Stand” at its Indiana warehouse, but hasn’t received any copies yet at its other three national warehouses, said Sue Zumberge, manager of Common Good Books in St. Paul.

Zumberge hadn’t planned to order any of the Pawlenty books for her store, saying her patrons likely won’t be interested. She joked that the store, owned by Garrison Keillor, is “one of the last bastions of liberalism.”

“He [Pawlenty] just won’t sell here; we didn’t carry any of the George Bush books and the Karl Rove book didn’t sell at all. But I’d be happy to carry them if someone would buy them,” she said.

(As we talked, she clicked on her computer to order two of the Pawlenty books for the store.)