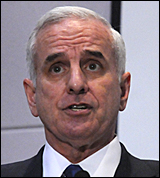 Gov. Mark Dayton, clashing today with Republicans’ “no new taxes” mantra, proposed a budget that includes $4.1 billion in tax increases as the major method to close a projected $6.2 billion budget deficit for the new biennium.

Republicans wasted no time in criticizing Dayton’s plan, which would raise $1.9 billion by adding an additional income tax tier for some of the state’s wealthiest residents. A different, temporary increase would raise nearly $1 billion more.

A temporary surtax in his proposal would make Minnesota the highest-taxed state in the nation for the near term.

Republicans have proposed cutting their way to fiscal solvency, but Dayton said he’s “not willing to make barbaric cuts” that he believes would be required to balance the budget through reductions alone.

By continuing the $1.4 billion K-12 education shift past the upcoming biennium and cutting $485 billion from the budget, Dayton said he expects to end the period with a $3 million surplus.

“I’m asking for your help over the next bienniums until we can turn this ship of state around,” Dayton said to the state’s wealthiest taxpayers.

The governor, who has long called property taxes extremely regressive, said he hopes to keep them steady by fully funding LGA.

Higher Education and Health and Human Services will see some reductions.

The University of Minnesota and the Minnesota State Colleges and Universities system will see a 6 percent state aid cut, but the state grant program will remain unharmed, said Sheila Wright, director of the Office of Higher Education.

Also included in Dayton’s budget proposal is a 6 percent reduction in the state workforce, which translates to about 800 layoffs.

Check back later for more coverage and analysis by Doug Grow and Sharon Schmickle.