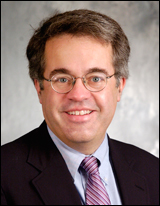 Terry Morrow’s voice shook. He’s a lawyer and associate professor of communication studies at Gustavus Adolphus College, but he needed notes to gather his thoughts.

The usually informal DFL House member from St. Peter apologized for such formality, but, he said, “It really gets to me when I see a bill so devastatingly detrimental to my daughters.”

Morrow was one of a group of DFL lawmakers who called a news conference this morning to oppose a provision in GOP-sponsored House File 7.

HF 7, introduced by 17 GOPers, is intended to remove a collection of local government mandates.

But among the mandates that would be removed is the 1984 Local Government Pay Equity Act, which mandates that governments pay women equally to men in public employment.

As a result, women public employees make about 95 percent of the pay that their males counterparts make; that compares with a gap of 76 percent for women in the private sector, according to the DFL representatives at today’s news conference. House DFL members expressed concern that there would be a rollback in women’s pay if this mandate were removed.

Morrow, his voice quivering, was the most emotional about it.

He said when he first ran for the House five years ago, he was asked if he was running as a Democrat or Republican.

“I’m running as a dad,” the father of 14-year-old and 17-year daughters told voters.

Today, he added: “I am deeply disturbed that House File 7 sends a threatening message about Minnesota’s commitment to equal pay … Bills send messages and, as a dad, I reject the misguided message that equal pay is no longer a right in Minnesota. … Look around this room, look around this Capitol and look around this state. My daughters and my wife, all women, are equal contributors, and they deserve equal pay for equal work.”

While members of both parties have been seeking to eliminate mandates on local governments, Rep. Erin Murphy, DFL-St. Paul, said, “This is a mandate worth hanging on to.”

The bill is still in its first committee, Government Operations and Elections.