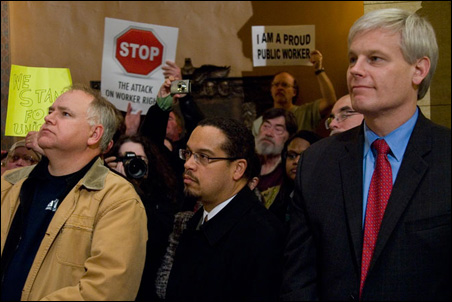 The battle over union rights for Wisconsin state workers is an important national issue that must be won to preserve a healthy middle class in America, U.S. Rep. Keith Ellison said today.

Minnesota’s 5th District congressman spoke on a conference call with other progressives, including two of Wisconsin’s Democratic state senators who have left the state to avoid a vote on ending collective bargaining with some of the state’s unions.

Ellison, who is a chair of the House Progressive Caucus, told the Wisconsin lawmakers — state Sens. Mark Miller and Chris Larson — that the battle they’re waging to protect union rights is “emblematic of what’s happening in other states and the federal government, too.”

Ellison said Gov. Scott Walker, who says the collective bargaining changes must be made to help resolve the state’s budget deficit, is showing signs usually associated with a dictator: “He won’t negotiate; that’s not the spirit of a public servant. He’s being extreme, radical and reckless, and he’s going to fail.”

The conference call was arranged by the Progressive Change Campaign Committee, which works to elect progressive candidates.

Adam Green, the group’s co-founder, said the Wisconsin battle has become a “proxy for what Americans are feeling nationally, massive tax cuts for corporations and the wealthy, followed by cuts to the middle class.”

He said rallies will be held Saturday, at noon local time, in all 50 state Capitols, to support the Wisconsin state workers.

Ellison said that the far right’s vision — which Walker is pushing in Wisconsin — would have an America with a tiny elite corporate community and the wealthy ruling a vast working class, with no social services. He said it would be similar to Nigeria or Pakistan.

He said the progressive vision for America, on the other hand, has “people who work hard and feed their families, with a social safety net and progressive taxation, where wealthy Americans are so happy to be Americans that they’re willing to pay their fair share.”

Ellison told the Wisconsin senators: “There’s no way to be more proud of you; we’re giving you all the positive energy we can send.”

Ellison also said that the fight in Wisconsin has given progressives “a great opportunity to recommit to our values — it’s a source of renewal, but we’ve got to win it. Anything we can do to help, we’ll do. At stake is whether we’ll have a middle class in America, or not.”

The two Wisconsin senators were asked when they might return to the state Capitol, but they didn’t give a timetable and said that it’s up to Gov. Walker now to negotiate on the union issues.