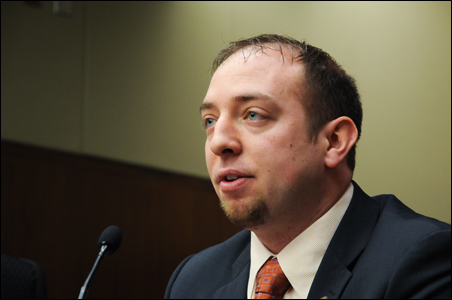 In an interesting flip, with the support of a key GOP committee chairman, a freshman Republican is carrying education legislation that was at least partially opposed last session by then-Gov. Tim Pawlenty.

Rep. John Kriesel, R-Cottage Grove, today brought his proposal before the the House Education Finance Committee. The measure would repeal a statute allowing the state to borrow from school districts with “high” reserve funds when the state is strapped for cash during certain periods in the fiscal year.

Currently, the state has the option of short-term borrowing to cover months with low-cash flow, or it can take money back from schools. In recent years, budget officials have chosen the latter.

Rep. Pat Garofalo, the committee chairman, supports the measure and said he’s “very confident” the measure will be included in an omnibus education bill.

“We need to make sure we’re not pushing the state’s problems onto our schools,” Kriesel said, calling the statute a “quirky provision” that’s “just one of those random things that happens to be a law.”

Kriesel, as a freshman, said he’s relatively unfamiliar with Pawlenty’s stance because he was busy fighting through a campaign during much of last session.

The law, originally proposed in 1986 to avoid short-term borrowing during that budget year, was made permanent in 1987. It wasn’t used again until January 2010. For the 2010 and 2011 fiscal years, Pawlenty delayed more than $600 million to districts —and that’s on top of $1.9 billion shift in state aid passed into law.

In effect, Pawlenty pushed the cost of potential loan interest from the state government to individual school districts.

According to data from a partnership formed to allow school districts to borrow collectively — leveraging larger loans to cut down on financing costs — districts borrowed nearly half a billion dollars between summer 2009 and summer 2010.

At that time, the former governor “said he absolutely had to borrow from schoolchildren,” said a critical Rep. Mindy Greiling, DFL-Roseville, who had proposed similar legislation for at least the past two sessions.

Greiling, who will let her version of the legislation fall to the wayside, said it’s typical for the majority party to introduce and support a bill similar to the minority’s “so that they get credit.”

Regardless who looks good afterward, she said, “We should have done it last year, and I’m glad we’re doing it this year.”

Greiling won a partial victory last year by changing the statute’s language — despite Pawlenty’s resistance — to say the state “may” borrow, rather than “must” borrow, from districts. She also helped to raise the amount of per-pupil reserves schools could have before they were targeted by the state.

While the legislation seems to favor districts, it also would benefit the state by discouraging schools from spending down reserves in order to avoid payment delays, Kriesel said.

The bill also has the support of the Minnesota School Boards Association, which worked to repeal the current law last session.

“Our membership would certainly support the repeal of this,” said Kirk Schneidawind, who does governmental relations work for the association.

Gov. Mark Dayton hasn’t had a chance to look at the proposal yet, said spokeswoman Katharine Tinucci.