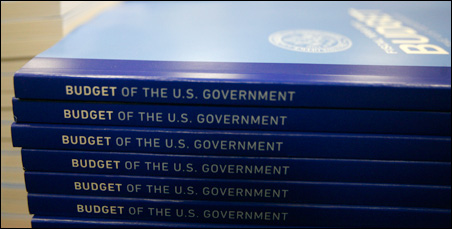 The president’s proposed $3.7 trillion budget for fiscal 2012 cuts many programs in an attempt to lower the deficit. But it also includes targeted spending on infrastructure and education.

The Democratic National Committee liked it: “This plan responsibly trims wasteful government spending while still fueling the incubators of growth: education, innovation, clean energy, and infrastructure. It’s a strategy to create jobs right now, grow the economy for the long run, and ensure government works for all Americans.”

The National Republican Congressional Committee doesn’t like it: “Despite rhetoric from Democrats pledging to get serious about fiscal reform and downsizing the federal government, President Obama’s newly unveiled budget proposal for next year only offers more of the increased spending, taxing and borrowing that voters have decisively rejected.”

State GOP leaders quickly blogged that it’s a bad budget: “President Obama’s budget proposal reintroduces tax increases that were largely ignored by the Democrat-controlled Congress, and the Republican-controlled House will be even less receptive.”

“This budget, with its record $1.6 trillion deficit, is a disappointment for the majority of Americans who want their leaders to put an end to wasteful Washington spending. If the President is serious about ‘winning the future,’ he’ll have to do more than propose a trillion dollar deficit for the fourth year in a row. Our country can no longer afford the status quo of borrowing 40 cents on every dollar we spend; we need to cut up the credit card and cut spending so that we can create jobs and grow the economy.”

“President Obama’s budget proposal is not a serious fiscal plan. By adding $7.2 trillion on top of an already unsustainable national debt, the President is putting America on a path towards insolvency. During these tough times, Washington must make the same tough decisions as families, businesses and state governments.

It’s especially disappointing that the President is refusing to reform runaway entitlement programs. We need to be honest with the American people and reform these programs before they bankrupt our nation.”

We’ll have more reactions, as they become available.