A war of words erupted today between the chairmen of the state DFL and Republican parties over a campaign piece, paid for by the Minnesota Republican Party, in the special election on the Iron Range.

The open seat, a special election set for next Tuesday, is a three-way contest with GOP candidate Paul Jacobson, DFLer Carly Melin and the Independence Party’s Cynthia Kafut-Hagen.

In the mailer sent to voters this week, a hunter is aiming a gun with the words “Take Your Best Shot.” 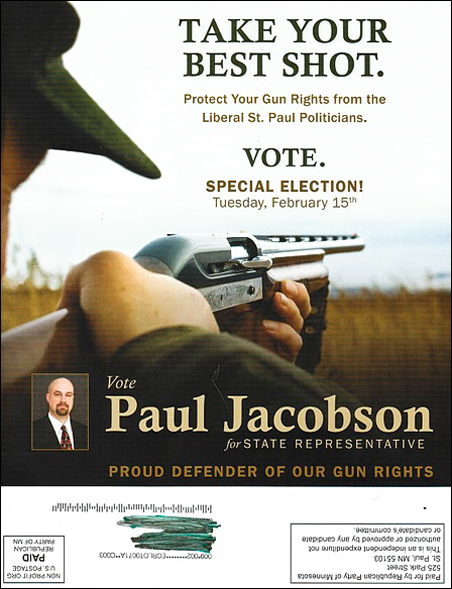 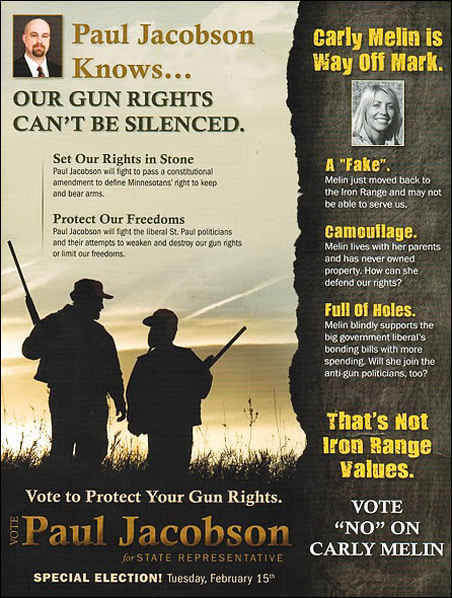 On the backside of the piece, Melin is called a “fake.” It reads: “Paul Jacobson Knows … Our Gun Rights Can’t Be Silenced.”

“We are a month away from this national tragedy and the whole gun-and-crosshairs debate, and this yahoo [meaning Sutton] puts this out?’’ Cerkvenik is quoted as saying. “The whole country was saying we have to put an end to this kind of politics. But here he is basically saying take your best shot at Carly Melin. This is outrageous.’’

Said Martin: “Our leadership in this country, on both sides of the aisle, called on everyone to tone down this rhetoric … There’s no place for this kind of rhetoric … There are more important issues, jobs, education, [the state] budget deficit, which the Republican candidate and Republican Party should be focusing on. Instead they are turning to the nasty device of rhetoric that really should be toned down, given what happened in Tucson.”

He called the gun issue on the Range “a classic wedge issue” and the mailer “really despicable.”  Martin said: “This kind of rhetoric creates an environment where our elected officials and our candidates have to worry about their own safety.”

The DFL chair called on the GOP to “disavow this attack,” meaning the flyer. (Jacobson has distanced himself from the mailer.)

But Sutton has no intention of doing that.

In an interview with MinnPost, Sutton said: “I think it’s absolutely shameful and unconscionable that they would attempt to link this flyer — which is obviously a hunter — to anything more nefarious. That they try to link this to the tragedy in Arizona is unconscionable.”

Sutton went on: “I think they [the DFL] should apologize for, instead of talking about the issues — sporting issues, Second Amendment issues — they’re trying to obscure the fact that their candidate is out of touch with the people on the Range.”

But “Take Your Best Shot”? Is there no danger in that?

Said Sutton: “Absolutely not, that is ridiculous beyond belief. I’m sure the liberal chattering classes might want to believe that. But we’re not going to stop talking about issues that are important to people in Minnesota, especially people on the Iron Range, for whom jobs and other issues are important, such as Second Amendment rights … They’re trying to silence our ability to talk to voters about hunting issues and gun rights. How low will they stoop?”

For his part, Martin, who is in his first week as DFL head, allowed that the gun issue is legitimate and the use of guns in ads or flyers is not necessarily prohibited.

But, he said, “I can tell you that we will be a little bit more careful.”

The open seat was held by Tony Sertich, who was recently appointed by Gov. Mark Dayton to the Iron Range Resources and Rehabilitation Board.

Martin predicted Melin would win in the longtime DFL district. Sutton acknowledged a Republican winning from Hibbing is going to be tough, but he wasn’t ready to concede.

“There’s opportunity,” Sutton said. “We think we have a really good shot.”