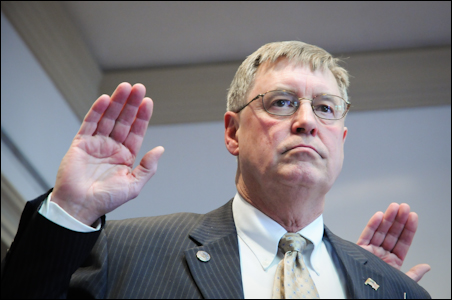 Republican Sen. Scott Newman might not be off the hook with Minnesota nurses, but everything’s fine with his Senate colleagues.

An ethics subcommittee on Wednesday said it wouldn’t investigate the Hutchinson lawmaker for an email sent from his office declining to meet with the Minnesota Nurses Association after the union supported his competitor in the November elections.

The email, which Newman told the four-member Senate panel he discovered long after it was sent, bears his legislative assistant’s signature.

“It’s over, and I fully intend to move on,” Newman said after the hearing. “I’m going to promise to do a better job.”

“It has interfered with my work,” he said of the complaint. “Now I want to get it behind me.”

The email surfaced in late January, and Senate DFLers Sandy Pappas, Kenneth Kelash and Scott Dibble filed an ethics complaint last week. In order to represent the complainants, DFL Sen. Ron Latz, an attorney, added his name to the list during the hearing on Wednesday.

What ensued was a less-than-judicial verbal sparring match between Latz and Newman’s attorney, Fritz Knaak.

Knaak even asserted Newman’s behavior is common around the Capitol. During his time in the Senate, Knaak said he typically afforded more time to known supporters.

“They had priority,” he said. “Who’s kidding who? That’s how it operates.”

But the email went far beyond prioritizing constituent visits to favor supporters.

“Unfortunately, Senator Newman will not see any organizations that donated to/supported his opponent Hal Kimball,” the email says.

As a note, Minnesota Campaign Finance and Public Disclosure Board reports show that the nurses union never donated to Kimball’s failed campaign.

Newman’s assistant went on to write: “After some careful checking, I discovered that the MNA had donated to Kimball’s campaign. Your association will be unable to schedule an appointment with Senator Newman.”

The email violated two Senate rules dealing with ethical standards and brought “the Senate into dishonor and disrepute,” according to the DFL legislators’ formal complaint.

Knaak shrugged the assertions off.

“This is a political embarrassment,” he said. “It is not unethical conduct.”

Latz, who did the brunt of the talking during the hearing, grilled Newman for roughly two hours. His questioning was met with a litany of “I-don’t-knows” and “I-don’t-remembers.”

But Newman remained firm, much to the Democrats’ surprise, that he didn’t have anything to do with the email.

Latz said he was “incredulous” an assistant on the job for two weeks would take it upon herself to enact a policy dealing with constituents without consulting Newman. Judging from Newman’s testimony, the assistant managed to retain her job.

“We doubt that a new staff member would have that complete and detailed policy written in an email without someone giving her directions,” Kelash, one of the DFLers who filed the complaint, said after the meeting.

Kelash said he was looking to find “more complete answers for the troubling questions raised in the email,” but didn’t know if there would be any future action.

At the end of the five-hour testimony, debate and closed-door decision making process, the committee unanimously found it didn’t have probable cause to begin an investigation and Newman emerged victorious.

His first words: “It’s been a long day.”