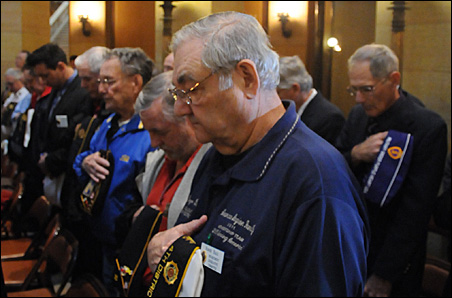 MinnPost photo by James Nord
Roger Ball, center, one of about 120 Veterans Day on the Hill attendees, recites the Pledge of Allegiance.

A group of veterans got an early look at part of Gov. Mark Dayton’s budget this morning — and liked what they saw.

Dayton, who spoke to a group of more than 120 veterans and their family members in the Capitol Rotunda, praised the vets for their service to the state and the nation and said the government has a “covenant” to “serve those of you who served our country so well.”

For that reason, Dayton said his budget proposal doesn’t cut funding for the Departments of Military Affairs and Veterans Affairs.

Instead, it adds more than $4 million for tuition reimbursement, higher education accessibility, an adult day-care center and a specialty care unit for veterans with Alzheimer’s. That compares with other agencies that could face up to 10 percent budget cuts.

Dayton’s proposal was met with cheers from the servicemen and women in the crowd.

It’s one portion of his controversial budget – criticized by Republicans for the $4.1 billion in new taxes that it includes – that could gain bipartisan legislative support.

Despite a proposal to cut from services to the poor, elderly and infirm, Republicans have held off on cuts from state aid to veterans. Provisions restricting spending cuts for some veteran services were included in a failed GOP bill to reduce $900 million in projected spending increases.

GOP Rep. Bruce Anderson, Veterans Services Committee chairman, told those attending Veterans Day on the Hill that it’s important to “make sure veterans and their families will remain a top priority for the state of Minnesota.”

But future funding levels depend on what resolution comes from the inevitable partisan fight over tax increases or spending cuts.

“I think the governor’s budget is kind of a wish list,” said Wally Lind, a department commander at the Military Order of the Purple Heart. “We’ll do our best to support him and the Legislature.”

Lind said he expects the Legislature to pare down Dayton’s proposal, which also includes slight spending increases for K-12 and early childhood education.

Corwin Morton, a Sons of the American Legion chaplain, said he came to the Capitol to support “the veterans and the benefits they so richly deserve that are being cut little by little.”

Dayton seemed to echo that sentiment.

“I thank you again for your dedicated service to our country,” Dayton said. “I stand ready to assist you in any possible way.”