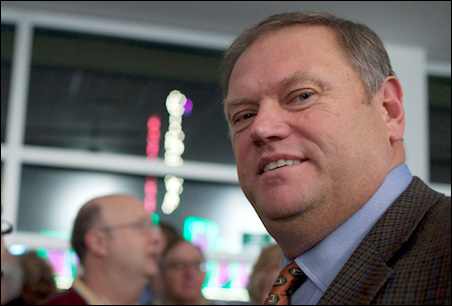 MinnPost photo by Terry Gydesen
Senate Minority Leader Tom Bakk said he has not become a co-author in part because of shots the Republicans have taken at the Iron Range.

It looks like a Vikings stadium bill has run into trouble even before it’s introduced.

Lawmakers agree that a stadium bill “has to have” bipartisan support, especially after the heavy spending cuts passed by the Legislature this week.

Getting both sides of the aisle onboard doesn’t seem to be a problem in the House. Rep. Morrie Lanning, R-Moorhead, said his bill, which was supposed to be introduced this week, had both bipartisan support and “bipartisan opposition.”

Both bills are written, and Lanning said he’s just looking for House co-authors, a process that “just takes time to do.”

But in the Senate, trouble arose behind closed doors for Sen. Julie Rosen, who’ll carry the bill there.

Senate Minority Leader Tom Bakk, author of last session’s doomed stadium bill, said he has not become a co-author in part because of shots the Republicans have taken at the Iron Range — an area he represents.

Bakk took issue with certain Republican policies targeting the Iron Range, including a measure that would take $60 million from an Iron Range resource fund to help plug Minnesota’s $5 billion budget deficit. The move enraged Rangers in the House, who compared it to a partisan raid on an integral part of their communities.

“Then for somebody to come to me and say, ‘I want you to work bipartisanly,’ ” Bakk said, “that street to work together isn’t going both ways.”

Rosen confirmed that her bill has faced some problems already.

“Politics have gotten a little involved,” she said, dodging a direct answer to the question of Bakk’s involvement in the bill. “That’s my quote.”

Bakk said he “wouldn’t say never” to backing the bill, but added, “People gotta start working together a little better.”

Political maneuvering isn’t the only problem the minority leader has with stadium legislation. He said GOP legislative leaders aren’t onboard with the proposal, and he believes it’s too late in the session to start pushing for a bill.

Bakk said he began urging Republicans in January to introduce the legislation before Gov. Mark Dayton’s released his budget Feb. 15, and before the cuts now under debate skewed public perception about what is going on at the state Capitol.

“I think the bigger problem is [Republican] leadership hasn’t provided any indication that they’re going to move a bill,” Bakk said. “I’m not going to spend my time on something that’s not going to go anywhere.”

An inside source “jumped the gun,” Rosen said, by releasing some specifics of the stadium bill to KSTP-TV, which ran parts of the proposal Wednesday.

Rosen confirmed that the report was accurate but said she wasn’t very familiar with it. She specifically verified that the state contribution would be between $250 million and $300 million and that a racino provision is not included in the bill.

KSTP reported that no state general fund money will be used to construct a stadium and that taxes on sports memorabilia, a Vikings lottery game and a surcharge on players’ salaries, among other provisions, will fund the stimated $30 million in annual debt service payments.

The Vikings would be expected to cover at least one-third of the stadium’s cost and local governments would have the ability to bid to have the stadium located in their area, according to KSTP.

Both Rosen and Lanning said Republicans’ biggest priority is passing the state budget, so the introduction of a stadium bill will likely wait until all the omnibus budgets are passed.

Dayton has publicly stated that he supports a “people’s stadium” like the Metrodome, not one that only benefits the Vikings.