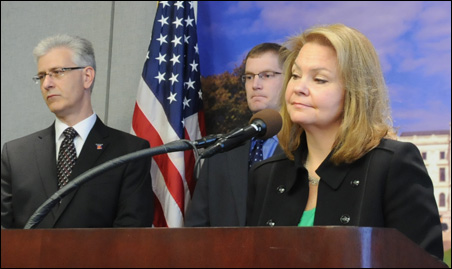 Sen. Julianne Ortman, backed by a group of business organizations, highlighted a series of tort reform measures today that the Chanhassen Republican says will make it easier for companies to create jobs and ensure “swift justice” for Minnesotans.

“The idea is to provide more access to justice for Minnesotans, swifter justice and less-expensive justice so we can put Minnesotans back to work,” Ortman said.

Minnesota has a six-year statute of limitations – the longest in the country, according to Minnesotans for Lawsuit Reform. Ortman’s bill would shorten it to four years.

Reflecting GOP goals across the board, Ortman and the business organizations on hand emphasized the need to bring Minnesota in line with other states and ensure a stable business climate.

“There is a growing excitement and, frankly, anticipation in Minnesota businesses on this issue and that we need to move forward today,” said Bob Johnson, of Minnesota lawsuit reform group. “When the states have passed tort reform … it translates into jobs.”

Lowering prejudgment interest rates makes it less attractive for people to bring forward unnecessary lawsuits, Ortman said, because there isn’t as much opportunity to make a profit if litigation grinds to a halt.

By doubling the jurisdictional limit for conciliation courts to $15,000, Ortman said she hopes to make the legal process cheaper and more effective. In conciliation court, fees are lower, and outcomes are achieved more quickly than in district courts.

But Sen. Ron Latz, the lead DFLer on the Judiciary and Public Safety Committee, defended many of the statutes that Ortman is attempting to change.

Latz, of St. Louis Park, said that because misconduct or injury isn’t often immediately apparent, the six-year statute of limitations serves to protect consumers and employees.

“These proposed reforms would trim back their ability to get justice,” Latz said. “It’s just that simple.”

He added that with a low prejudgment interest rate, it can be cheaper for some companies to extend lawsuits in order to avoid paying judgments immediately, thereby stringing along plaintiffs in need.

Three of the four bills were heard today in the Senate Judiciary and Public Safety Committee and face Friday’s legislative deadline for policy bills.

Ortman said she hasn’t spoken with Gov. Mark Dayton about his views on the legislation.

“In general, when it comes to some legal reforms, I think we’re very open to that, and I think you see large support from … small businesses. You know, my heart’s with small business, and so anything that can be helpful and make people’s lives a little easier to run their business and hire people, I’m all for it.”