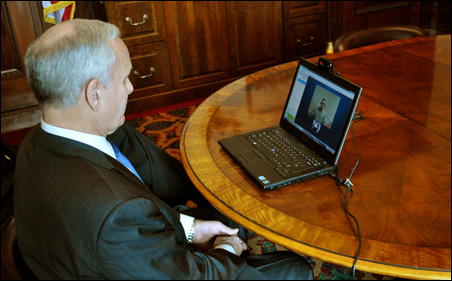 Navy Capt. Ross Leuning, now serving in Iraq, will be the state’s newest judge when he returns from active duty in July.

“I am proud that Captain Ross Leuning is my first judicial appointment, as he exemplifies the outstanding caliber of person I will seek for these important positions. Captain Leuning is … serving our country and the cause of freedom in Iraq, where his military judicial experience further qualifies him for assuming those responsibilities on the Third District Court.”

Leuning is command judge advocate for the U.S. Navy, serving at the Al Asad Air Base in Iraq. Dayton interviewed him about the job via Skype.

Leuning also is senior assistant Olmsted County attorney and is certified as a general court-martial judge for the Navy and Marine Corps.