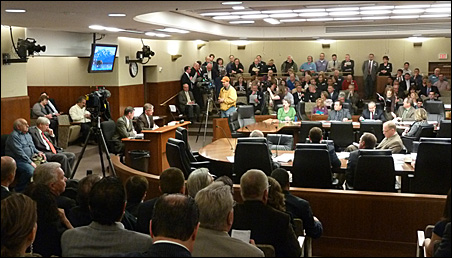 MinnPost photo by Jay Weiner
It was standing room only at Thursday’s racino hearing at the Capitol.

The first hearing this session on the possible addition of slot machines at the state’s two horseracing tracks turned “informational” this morning. It moved into that non-action mode because, racino bill author Rep. Bob Gunther said, the vote in the House Jobs and Economic Development Finance Committee was going to be “very close.”

Gunther, R-Fairmont, said his committee would meet again next week to take action. A Wednesday evening Senate hearing on racinos was canceled hours before its start.

Advocates for more gambling at Canterbury Park and Running Aces argued that racinos would benefit the state’s horse industry and be fair competition for the 18 casinos operated by the state’s Indian tribes. But those opposed to racinos said adding slots to the tracks would cut deeply into tribal businesses that employ thousands of people — mostly non-tribal members — in Greater Minnesota.

A key element of House File 1352 is the creation of a “Minnesota Future” fund for economic development. Much of today’s testimony before the committee addressed whether using racino revenues to fund job growth might, instead, reduce the number of jobs previously created by tribal casinos.

Meanwhile, a charitable gaming bill — adding video pulltabs to state bars and restaurants — advanced in another House committee, and efforts to approve a casino on Block E in downtown Minneapolis have been stepped up.

A fuller report on this hearing and gambling issues will be published later.