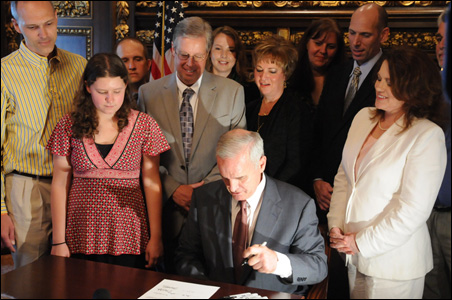 A bipartisan bill that tightens restrictions on when it’s acceptable for high school athletes to play after head injuries received a second signature from Gov. Mark Dayton in a mock signing ceremony held Wednesday.

The law, actually signed in late May, requires coaches to take online classes about the warning signs and symptoms of concussions each year. It also requires a medical examination and approval before young athletes can return to the field.

Kayla Meyer of New Prague — who was one of at least three students to testify before lawmakers about the effects that mismanaged concussions can have on student athletes — attended the ceremony with her family.

“That’s terrific that you’re so persuasive,” Dayton said. “Maybe I should take some lessons from you.”

“[Kids] need to realize that their health is more important than the game,” she said.

Rep. Rod Hamilton and Sen. Michelle Benson, the bill’s chief authors, both attended the signing ceremony and said they’re glad the new law might prevent some of the “long-lasting implications of a concussion.”

When asked how she felt to be a part of the legislative process, Meyer had a witty reply on hand.

“It’s really amazing to be here,” she said. “They didn’t include this part in the fourth-grade field trip.”