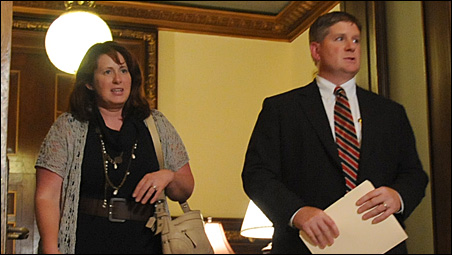 Wednesday came and passed without a budget deal between Gov. Mark Dayton and GOP lawmakers, setting the stage for today’s final day of drama before a potential partial government shutdown.

Today, the state Capitol will be brimming with lawmakers, protesters and heat. With legislative quorums likely present, a temporary “lights on” funding measure would have to be passed by midnight, the end of fiscal year 2011, to avert a government shutdown.

Dayton had called Wednesday “the day we’re going to have to make final breakthroughs or we won’t have been successful.” But after hours of talks that lasted into the night, the governor refused to speak with the waiting press.

Shortly after, Senate Deputy Majority Leader Geoff Michel came down from a separate meeting and said, “We do not have a deal.”

The “cone of silence” that has been shrouding budget negotiations between the governor and the GOP leaders makes it unclear how much progress has been made, but two likely sticking points are K-12 Education and Health and Human Services.

Regardless, House Majority Leader Matt Dean told reporters the sides were near a deal.

“We’re very, very close on many, many areas and we still believe that a shutdown is unnecessary and avoidable,” he said. “Two weeks ago, it was avoidable; last week, it was even more avoidable; we believe that, at this point, it would be very difficult to explain a shutdown, so we believe we are very close. We’re going to continue working.”

But the strong front that the GOP leaders and Dayton put on during past days’ negotiations, with the two opposing groups often appearing together, seemed to crumble Wednesday.

When Dean and Michel came downstairs from a meeting — after Tinucci said the governor was headed home — the Republicans heaped on rhetoric that, until recently, had been largely limited to to GOP spokespeople on Twitter.

“We’ve got another day tomorrow; we hope the governor will call us back. That’s on him,” Michel said. “He has to sign the paperwork to bring us back to work. We’re ready to go, we’re very close on some bills, we’re actually very close on most bills, so tomorrow will be a very important day.”

An important day that’s sure to be interesting.