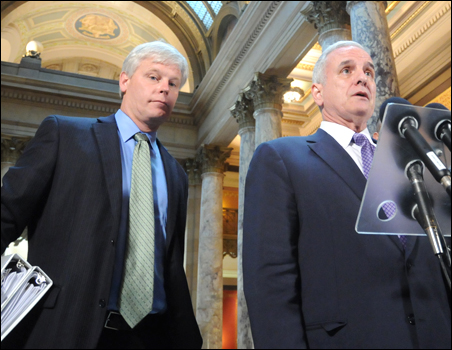 It’s the final day he and lawmakers have to come to an overall agreement on a new Minnesota budget and avert a government shutdown, he said after a series of meetings Tuesday that have failed to produce a settlement.

Even if a global agreement can be reached tomorrow, Senate Minority Leader Tom Bakk said a temporary “lights on” spending bill would have to be passed by midnight Thursday to keep state services running while the details of a budget agreement are worked out and bills passed.

“We recognize time is growing short so we recognize tomorrow is the day we’re going to have to make final breakthroughs or we won’t have been successful,” Dayton said.

Bakk said that a Wednesday agreement would allow Dayton to call a special session for the following day and give lawmakers scattered across the state a chance to return to St. Paul.

Dayton and the GOP leaders, still under their self-imposed “cone of silence,” refused to characterize how negotiations have progressed, but participants seemed flustered and pessimistic as they ended a series of meetings Tuesday that began late last week. 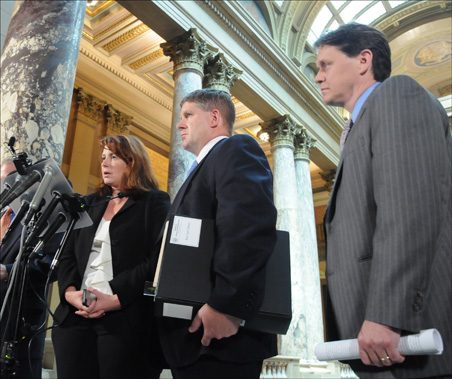 “We have two days till July 1 so that’s the timeline,” Dayton said. “It’s come down to a willingness to reach an agreement, and that’s all I can say.”

When asked if a deal could realistically be struck, Bakk responded: “I think it depends on people’s willingness tomorrow, and I don’t have the answer to that.”

But so far it sounds like neither side is ready to make such a deal. That means Dayton hasn’t dropped his call for new revenues and the GOP won’t budge on keeping spending to what’s in the state checkbook.

Dayton skipped a speaking event at a womenwinning event in Minneapolis over lunch to continue negotiations, which ended at roughly 3:30 p.m. to allow lawmakers to attend late-Sen. Linda Scheid’s funeral.

They’ll continue meeting Wednesday morning after taking the night to have internal discussions, Dayton said. “This is an opportunity for everybody to take a look at it, the reality of the situation, and realize that tomorrow is the day we have to get it done if it’s going to get done …”

It appears the Health and Human Services budget was the main focus of discussion Tuesday, which Senate Majority Leader Amy Koch said was a huge sticking point between lawmakers and the Dayton administration.

In making the admission, Koch said she thought it would be possible by Thursday to pass a number of less controversial bills, such as K-12 Education and Public Safety and the Judiciary.

In a compromise offer about two weeks ago, the GOP proposed to fund those areas — nearly half the state budget — up to Dayton’s levels and to drop the roughly $200 million in tax relief included in their budget.

Koch renewed her hope Tuesday that the GOP’s “halfway point” proposal, combined with a temporary spending bill for the rest of the budget, could prevent a shutdown.

“You can do a combination of some temporary funding and those other bills and then keep moving,” she said, adding that the GOP leaders have been in contact with their members to ensure lawmakers are ready to return for a special session if necessary.

But Dayton, who rejected the proposal outright when it was first proposed, also said he wouldn’t call a special session — which could be used to pass a “lights on” spending bill — until a global budget deal is reached.

The one certainty for Minnesota’s state employees and services? The courts.