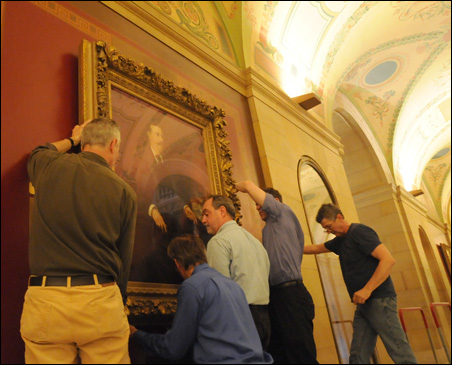 MinnPost photo by James Nord
A portrait of William Merriam, Minnesota’s eleventh governor, being re-hung in the state Capitol.

There is real work being accomplished at the Capitol.

For example, this morning, the portrait of Minnesota’s 11th governor, William Merriam, was re-hung a few paces from the entrance to the governor’s office. Like the portraits of 20 other governors, the portrait had been put behind a special, museum-quality glass during a two-week stop at Master Framer’s of St. Paul.

Getting the portraits covered by glass is an ongoing project being run by the Minnesota Historical Society, although it will come to a halt if there’s a government shutdown because the operation receives its funds from the Legacy account. Authorization to use the $450 million in Legacy money will need to be passed as part of a special session.

Until this project was begun two years ago, the portraits of the governors, which since 1944 have been on display in hallways throughout the Capitol, were not protected by glass, and some had been vandalized.

It costs about $2,500 to redo each of the frames so that the glass does not touch the surface of the paintings.

By the way, the portrait of Gov. Tim Pawlenty is expected to arrive in Minnesota in the next few weeks. No date has been set for its unveiling.