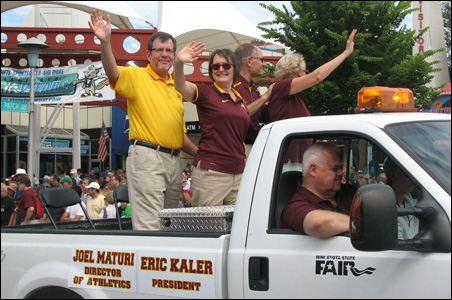 New University of Minnesota President Eric Kaler and his wife, Karen, waved and smiled to thousands of Minnesotans Sunday, as they rode in the back of a pickup truck in the daily State Fair parade.

Also in the truck were University Athletic Director Joel Maturi and his wife, Lois.

More people seemed to be shouting out questions and statements to Maturi, such as: “How’s that football team gonna be?”

No one seemed to ask Kaler (or Maturi) about the average ACT scores for incoming freshmen, but that’s life.

The U dignitaries followed the university’s marching band, which played and marched with vigor.

This was the third parade for the Kalers since he took the president’s job at the end of June. They were in Delano’s Fourth of July parade and the July 20 Aquatennial parade in Minneapolis.