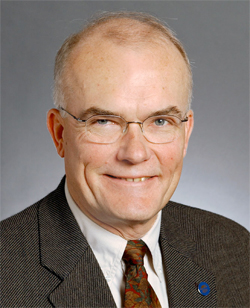 The funeral for State Sen. Gary Kubly, who died Friday after battling amyotropic lateral sclerosis, or Lou Gehrig’s disease, will be Wednesday in Granite Falls.

The 68-year-old DFLer, who was a retired Lutheran minister, had come to St. Paul for the legislative session, hoping to finish it, but was hospitalized last Wednesday and died Friday at Regions Hospital in St. Paul.

The funeral will be at  11 a.m. Wednesday at Granite Falls Lutheran Church.

Kubly’s passing brought condolences from many leaders who admired his honesty, sincerity and tenacity.

“Gary was a dedicated public servant and an outstanding leader. He lived his life with quiet strength and principled dignity, as evidenced by the remarkable courage with which he faced his final illness. He is an inspiration to all of us, who knew and worked with him.”

“A pastor, he was kind, witty, humble and served with grace to the end.  He served his rural district like he served his church, always listening and quietly getting things done. My thoughts and prayers are with his wife Pat and his family.”

Republicans, too, stepped up to honor Kubly’s memory, said the West Central Tribune.

“We had some differences of opinions at times but we were both respectful to each other. Gary will really be missed in the Minnesota Senate because of his thoughtful demeanor and intellectual approach to issues.”

And state Sen. Joe Gimse, a Republican from Willmar, said:

“He was a very kind and decent man.”

Funeral for state Sen. Gary Kubly to be Wednesday in Granite Falls