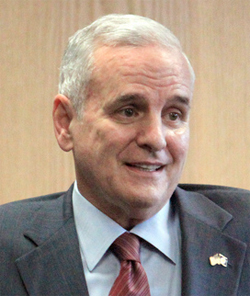 Gov. Mark Dayton vetoed the Republicans’ business tax relief bill Friday morning, even though there were not-so-subtle suggestions that his signature would make it easier to pass a Vikings stadium bill on Monday.

Although he’s pushed hard to get the publicly funded stadium deal done, Dayton said the two issues should not be linked and said he’d made it clear that he wouldn’t sign a bad tax bill to get a stadium agreement.

He said it’s been hard to find areas of agreement with Republicans, and that “their version of compromise is when we do it their way.”

The tax bill called for a freeze on business property taxes and relaxed sales tax rules, which Republicans said would kick-start the state’s economy and lead to jobs gains.

Dayton called it “not fiscally responsible” and “not balanced,” saying it would hurt the state budget, and involved too many breaks for businesses and not enough for homeowners.

He said he’s willing to negotiate further with the Republicans on the tax bill, although there are only a few days left in the session.

He said he hadn’t been told specifically by Republicans that signing the tax bill would provide more GOP votes for the stadium, but he has heard comments. His message to legislators: Keep the two bills separate.

And he said he vetoed the tax bill quickly, to keep it from being a factor in the stadium debate.

In his veto letter, Dayton said the tax bill proposal would reduce the budget reserve in the current biennium and add $145 million to the projected deficit in the next biennium.

And he said the bill would give $45.5 million in tax relief to businesses, but only $4.1 million to homeowners and “virtually none to renters, seniors and farmers.”

He said he’s willing to consider parts of the bill that help communities with economic development.

And he expressed more disappointment in the process:

“Two weeks ago, we began discussions about a bi-partisan, fiscally responsible tax bill to encourage economic growth and job creation. That bi-partisan effort was abandoned for this very partisan measure. In the short time left in this session, I remain available to continue our development of a fair, financially sound tax bill, which encourages job creation, but not at the expense of our future.”

Republican leaders are scheduled to comment on the veto this afternoon.