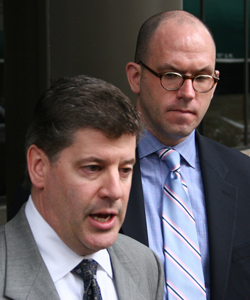 The Minnesota Senate still hasn’t paid the $46,000 bill for its defense lawyers’ initial work in the Michael Brodkorb wrongful termination case, and another big bill is on the way.

DFL Minority Leader Tom Bakk, who, along with Republican majority leader Dave Senjem, must sign the check, is responsible for the delayed payment on the first bill.

Furthermore, he said, “I have to believe there’s an interest clock running on the late payment.”

There will be. According to the terms of the agreement with the Larkin Hoffman law firm and attorney Dayle Nolan, the bill increases by 1.5 percent a month — about 700 dollars —beyond the June 21 due date.

Secretary of the Senate Cal Ludeman agrees. “It’s probably going to take a rules committee meeting, but if it gets done by the 21st of June, we don’t need to worry about the interest fees.”

The Senate, though, will need to worry about the next legal bill.

The fees in the current bill covered only the period ending in the middle of March.  They do not cover the hours Nolan sat in a Senate ethics hearing involving Sen. Geoff Michel’s handling of the Brodkorb dismissal. It later was revealed that Brodkorb was the unnamed staffer who was involved in a personal relationship with his supervisor, then Republican Majority Leader Amy Koch.

The Michel hearings in late March and April ended without a decision. They incurred a minimum of 10 hours of legal time, followed by subsequent legal work. Nolan’s hourly rate is $330.

Furthermore, the Senate is only authorized to cover legal fees of up to $50,000.  The rules committee, an 11-member panel chaired by Senjem, would need to authorize another appropriation to cover the second bill, which the Senate expects to receive shortly.

All of those factors lend force to Bakk’s demand for transparency in what taxpayers will end up paying.

In January, Brodkorb and his attorneys began tryuing to negotiate a settlement of his dismissal. He has yet to actually file a legal claim, waiting to get a go-head from the Equal Employment Opportunity Commission.

But, Bakk has no doubt that Brodkorb will, and he foresees the legal wrangling dragging on for years.

So Bakk is demanding a vote from the seven Republican and four DFL members. “I want the rules committee to approve the bill,” he said.  “There needs to be a process.”

You can expect the committee to meet in the next week.

Minnesota Senate to get hit with another Brodkorb defense legal bill