Steve Fisher of Edina chatted with former Republican Rep. — and now candidate — Ron Erhardt, who was out door-knocking on a splendidly sunny Monday afternoon. What surprised Fisher is that the Korean War veteran and lifetime Edina resident is trying to win back his old seat with a new party.

Erhardt — who epitomized the moderate, country club Republican (he even lives in Edina’s Country Club district) in serving the district for 18 years — is running this time as a Democrat.

He broke with the Republican Party four years ago when he was denied endorsement because as one of the “Override Six” Republicans, he voted to overturn Gov. Tim Pawlenty’s veto and raise the state’s gas tax. He’s been plotting his return ever since.

“You can’t win as an independent,” he said.  He tried and didn’t in 2008.  He then tried unsuccessfully for the DFL endorsement in 2010. But in 2012, he won the DFL endorsement by acclamation for a seat the DFL  Party has coveted since 2008, when Edina voted for Barack Obama.

The DFL is not an easy sell even among Edina’s moderate voters, Erhardt admits.  He and his Republican challenger, Bill Glahn, agree the district leans GOP. “Fifty-fifty with a slight Republican edge” is how Glahn describes District 49A.  They also agree the election will be very close.

Glahn owns an energy consulting firm and served as deputy commissioner of commerce under Pawlenty.  He sees himself as the underdog in name recognition but a contender, given the district’s history of electing only Republican legislators. 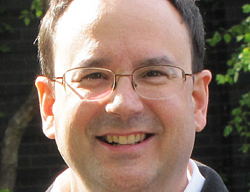 Glahn’s message of reforming government operations, including education and business taxes, resonated well in previous elections. They were the same themes articulated by Keith Downey, the Republican who won two House terms and is now running for the state Senate. Glahn makes it clear that “I differ with Ron on the need for more revenue.”

Erhardt does not demur on the subject. “We are going to have to raise revenue” to deal with the state’s structural budget balance, he said but adds: “I don’t agree with [Gov. Mark] Dayton that we raise taxes on high-income earners.” If an income tax increase is the answer, he said, it should be applied across the tax brackets.

Erhardt wears the DFL label with a bit of reticence. His literature brands him as “Edina’s representative” with one small-print reference to his DFL endorsement. “I’m still a fiscal conservative and social moderate,” he says.  When door-knocking, he explains his change of parties only in passing, preferring to stick to his campaign themes of compromise and collaboration.

“I want to get the Legislature back to the era where we can compromise and get things done,” he tells one resident and then adds, “I was a moderate Republican but I’m running as a Democrat.”  The homeowner, a woman in her 30s, responds, “Awesome.”

She represents the voter Erhardt needs to attract by the thousands. “My plan is to have the moderates come my way.” To do so, he runs an opposite course to most candidates who prefer to avoid debate on social issues. Erhardt boasts of his pro-choice and pro-gay rights positions. “I’ve been ahead of the Democrats on the social issues,” he said.

On all fronts, Erhardt is determined to prove his fitness as candidate. He started early on door-knocking and plans to cover all 16 Edina precincts. (His tip for shortening the distance between front doors: Cut across the lawns but not the flower beds.)  He says he will participate in any and all forums and debates. And he will roll out endorsements.

Fundraising could be a hurdle.  Glahn will ask for money from the vantage point of a candidate running to become member of the majority party.   House Speaker Kurt Zellers, a popular legislator among Edina Republicans, has already scheduled the first fundraiser for Glahn. Pawlenty, Glahn’s old boss, may do the same.

A similar offer from Gov. Dayton on behalf of Erhardt would be not be as welcome. So, Erhardt says he has a strategy to raise money, but not strictly from traditional DFL sources. He will tap into the independents who supported the gubernatorial campaign of Tom Horner, another Edina resident. Erhardt said that Jim Campbell, former CEO of Wells Fargo Bank, has contacted him about a major fundraising event.

Longtime Erhardt supporters are pleased he’s running again but perhaps puzzled why, in his 80s, he wants to take on the task of campaigning and, if successful, the grind of serving.

Erhardt lays out his logic. He will be a key player in untangling legislative gridlock, he says, because “I was at a good place in my legislative career for making deals and getting things done.”

He offers a personal reason, as well. “I have respect for the Legislature as an institution,” he said. He liked that job, and he wants it back.

Former GOP Rep. Ron Erhardt tries to win back his old job as a Democrat