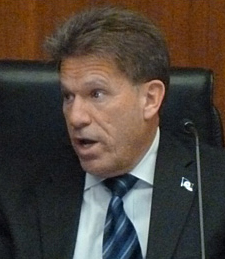 The Secretary of State’s Office announced Monday that it was renaming the controversial Photo ID amendment, which is set to appear on the ballot in November if it survives a Minnesota Supreme Court challenge.

If Secretary of State Mark Ritchie gets his way, the amendment’s title on the ballot will appear as: “Changes to in-person & absentee voting & voter registration; provisional ballots.”

Last month, Ritchie changed the name of the other proposed constitutional amendment set to appear on the ballot, the so-called marriage amendment.

The Legislature included its own title when it passed the Photo ID amendment in April: “Photo identification required for voting.”

The secretary of state has the power to name constitutional amendments, according to Ritchie’s office, but they must also be approved by the state attorney general.

Opponents of the amendment said the title accurately describes the changes to the election system that Photo ID would cause.

“It’s certainly more descriptive” than the GOP-backed title,” said Greta Bergstrom, a spokeswoman for TakeAction Minnesota, which opposes the amendment. “I think it gives voters a picture of what they’re voting on.”

Supporters of the amendment criticized Ritchie for showing his bias against Photo ID in the ballot question title.

“I do find it unfortunate because he’s showing his bias in a big way,” said Dan McGrath, executive director of Minnesota Majority, a group that supports Photo ID. “The title he’s proposed, I believe, is misleading.”

McGrath said its likely Photo ID supporters would challenge the name in court, as marriage amendment proponents announced they would do for that ballot question on Monday.

Ritchie renamed the marriage amendment “Limiting the status of marriage to opposite sex couples.”

“Recognition of marriage solely between one man and one woman” appeared on the Republican-backed amendment that passed the Legislature in 2011.

Monday’s announcement means both questions slated to appear on the ballot in November are in litigation.

The Republican-led Legislature in June voted to intervene in a lawsuit brought by Photo ID opponents to have the amendment stricken from the ballot. Supreme Court arguments begin on July 17.