The government raised $19,835 Monday night for victims of the Tom Petters schemes by auctioning off 86 of his personal items.

By the end of the evening, we “contributed” a modest amount to that total.

The auction was at the Luther Auction House in North St. Paul, not far from our house. My wife is interested in things like that — antiques, auctions and felons  — so we went over Monday afternoon during the preview period to check it out.

We weren’t planning to stay for the actual auction at 6 p.m., but after looking things over — and realizing there was only an hour left to showtime — we went across the street to the Polar Lounge for one of those tiny $1 tap beers.

We got back as Tracy Luther started the auction right at 6, with maybe 175 people in chairs and standing around.

Luther started the bidding by saying: “I bet there’s some Tom Petters DNA on there somewhere. From his fist.”

There was lots of art and sports memorabilia, including many hats and posters from Super Bowl XLII in 2008, including two photos of Petters with Michael Strahan, then with the champion New York Giants (and now with Kelly Ripa).

Luther said: “It’s signed by Strahan: ‘From one champ to another.'”

Someone from the audience called out: “You mean ‘Chump’ …”

A Timberwolves jersey, XL, still in its plastic wrapping, went for $35.

All of Monday’s winning bids are online at the Luther site; the first 86 are the Petters’ items. Many of the others are sports cards and such from the late radio personality Dark Star’s collection.

Winning bidders had to sign a three-page disclaimer sheet from the Justice Department, confirming that they were not involved in the Petters case in any way.

MinnPost photo by Joe Kimball
Good thing we had the van.

While we were perusing the auction items beforehand, we’d noticed a very large piece of art on the wall, called “Reclining Bird,” and signed by Barb Oak. We’d never heard of her (and still can’t find anything online about her.) And while the tannish piece was interesting, it was really too big — 40 inches by 60 inches — for display in any normal-sized house.

But there was a guy keeping a close eye on it, and then he called someone and was describing it in great detail, the colors, the size, the textures. He stayed on the line for a long, long time, so we figured he was one of those experts on the PBS shows who knows the value of auction items and might have found a deal.

When Item 32, the Reclining Bird, came up, my wife leaned over and said she wanted to be able to say she’d bid on something at the Petters auction, so she planned to jump in early on the Bird and up the price for the “expert” who’d been scoping it out.

Opening bid was $50. She held up her bidding number at $60. “Sixty dollars, the lady on the side,” Luther said.

And then, before we could take a big swallow, Luther says: “Going, going, gone. $60 to the lady on the side.”

Oh, my. Good thing we had the van.

It may not be valuable, and we sure don’t have a place for it, but it’s kind of a good story. 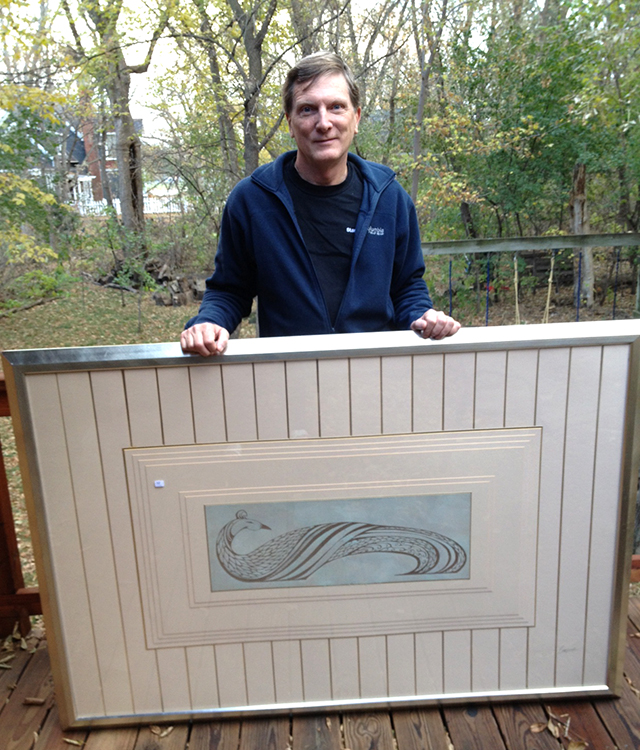 Courtesy of Joe Kimball
The proud reporter with his new acquisition.