It used to be a Republican stronghold — Senate District 49, which encircles Edina, West Bloomington and now, parts of Eden Prairie and Minnetonka.

But this year, there are no incumbents, no oft-elected candidates who used the district’s strong sense of tradition as part of their winning strategy.

With the open seats, the Republican candidates are taking nothing for granted and DFLers see the prize seats they’ve coveted for years within their grasp.

An indicator of the change is Republican Rep. Keith Downey’s strong effort to fill the Senate seat vacated by the GOP’s Geoff Michel.  Downey, who now represents the western half of the district, aims to raise $120,000 in an effort to beat DFLer Melisa Franzen.  His campaign made strides toward that goal with a fundraiser Monday that featured former U.S. Sen. Norm Coleman.

“This is not a ‘wave’ election,” Coleman said in an interview. “In this cycle, it’s anti-incumbent.  You can’t depend on party ID.  You’ve got to be-old fashioned — do your homework.”

So Downey door-knocks, he releases regular email updates and even has an ad running on cable TV. One of the party’s leaders on government reform efforts in the Minnesota House, he distributed a six-page “Reform Roadmap” at Monday’s League of Women Voters’ candidate forum.

Political newcomer Franzen, an attorney at Target Corp., appears to be keeping up with Downey on the fundraising front.  Her finance report filed in July shows a balance of nearly $40,000, which insiders say could be close to double that amount now. Her fundraising base is unusual for a legislative race, with more than two-dozen contributions coming from out-of-state.

At the candidate forum, Franzen was aggressive in her opening statement. “Our district needs a moderate voice, not an extreme voice,” she said.  The candidates showed their differences, both in style and substance. 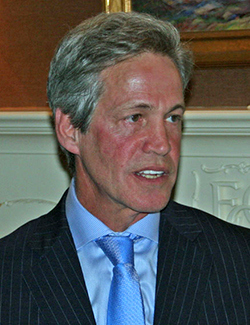 Downey says there will be enough new revenue in the next budget cycle to keep it in balance and pay back funds borrowed from Minnesota schools. Franzen, however, says there really is no surplus and that the state needs new revenue, such as an Internet tax. Franzen supports a southwest light rail corridor as a jobs creator; Downey says there are other multimodal transportation options to relieve congestion.

Downey offered his comments with a mix of facts and figures; Franzen peppered her remarks with words like “compromise,” “tolerance” and “moderate.”

The contest and the contrast are similar on the east side of the district where Republican Terry Jacobson is facing DFLer Paul Rosenthal for the House seat in 49B.

Another open seat, 49B covers mainly West Bloomington with an even split among Democrats and Republicans. It’s one of the races we are highlighting in our reports on who will control the Legislature in 2013.

In 49B, Rosenthal holds the name advantage as a former state representative for the area in 2009 and 2010. Like many DFL candidates, he uses the theme that voters are frustrated with legislative gridlock. “It’s definitely a moderate district,” he said. “I vote with both sides of the aisle.”

Jacobson says she occasionally hears similar comments.  “Voters say they want compromise, but what they want is people working together for a solution,” she said.

“For me, it’s meeting people at the door that makes the district, having the one-on-one conversation,” Rosenthal said. Jacobson, too, knows the district well. “I’ve  walked the district for many years through work on other campaigns,” she said.

At the moment, outside spending on the candidates, for and against, is minimal. But both DFLers and Republicans agree that Senate 49 and House 49B are target districts and that independent groups will be weighing in soon. So, the candidates themselves are concentrating on offense. “I’m just focusing on my own campaign,” Jacobson said.

That’s the way it should be for the candidates, according to campaign veteran Coleman, who now directs a political action committee that is spending to elect Republican congressional candidates. “Not being carried in by coattails, that’s a good thing,” he said. A candidate should be “carried in by the sweat of your brow.”

There are no visible perspiration beads yet in the District 49 races, but all involved say they expect the sweat will rise on Election Night, where these races are expected to be decided by 1or 2 points.